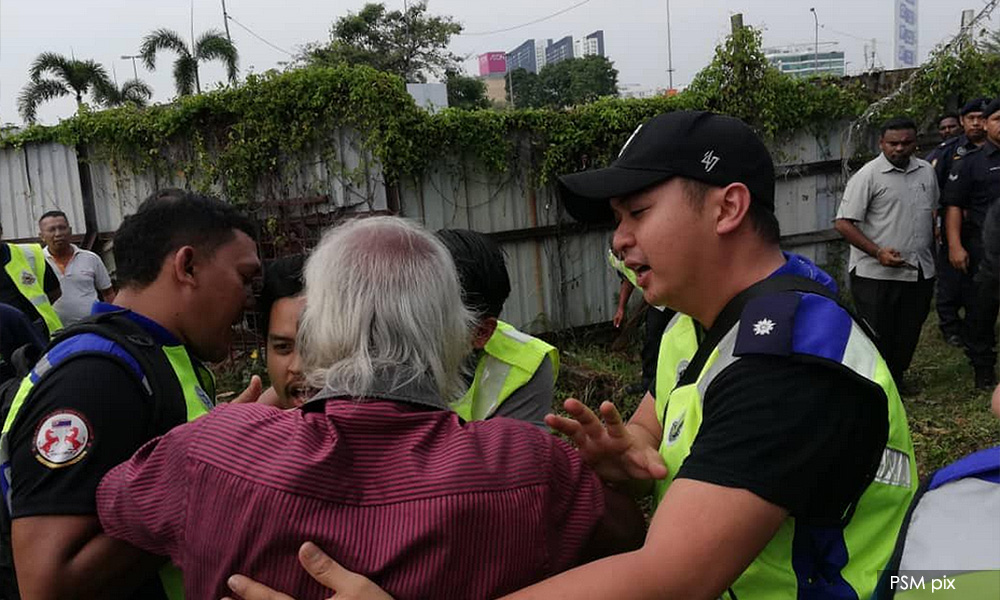 The police arrested five people in Bandar Botanik, Klang, after a confrontation with the staff of the Klang Municipal Council (MPK) this morning while the council was sleeping a cattle farm and two Hindu temples, according to reports in the media.

The five are owners of a cattle farm, two brothers and two political activists from PSM.

The sun quoted Southern Klang OCPD Shamsul Amar Ramlee said the owner of the farm was arrested because she reportedly blocked MPK personnel by throwing cattle urine and dung at them around ten o'clock in the morning.

The other four were arrested for alleged provocation when they brought in the personnel who tried to carry out the demolition, the report said.

Shamsul reportedly said that the five men between the ages of 24 and 59 were taken to the district police headquarters for interrogation.

He said the police had been called in to assist the MPK and district land office in the operation.

According to The star, Klang PSM branch adviser K Ramasamy said that approximately 150 enforcers from the Light Strike Force of the police, MPK and Klang Land Office arrived at 8.30 am to dismantle the buildings.

He allegedly claimed that MPK had also confiscated 30 of the 150 cows on the farm, which also has 50 goats.

Both The sun and The star identified the owner of the farm as A Thevindran, while the PSM activists who were detained were Nik Niki Afiq and K Paranjothi.

The sun Klang PSM division secretary M Sivaranjini quoted as saying that Thevindran had been keeping cattle in the area for decades.

The area used to be the Bukit Tinggi estate, but Thevindran was supposed to stay 16 years ago by a residential developer when it was developed into Taman Botanik.

Sivaranjini reportedly said that there was an oral agreement between Gamuda Bhd and Thevindran that he would eventually get approval for the country and the company also built the structure of the cattle farm and two Hindu temples there for him.

In 2016, the district office presumably told Thevindran that the country he inhabited had been transferred to the Selangor Islamic Religious Department (Jais).

Thevindran was looking for an alternate location within five kilometers of its current location through various meetings with state authorities, but instead was offered a 40 km road in Kuala Langat.

Sivaranjini said that Thevindran rejected the offer and then received a message to leave the country last week.

Reportedly, Sentosa assembler G Gunaraj today intervened in the demolition, delaying two days for further discussions. However, part of the farm and a Hindu temple had already been demolished.

Meanwhile, The star reported that the country belonged not only to Jais, but also to the Selangor Drainage and Irrigation Department (JPS) department.

"We had no choice but to turn them off today, because Jais already has plans for this area and there are also plans to expand the River Aur for flood control," said Mohamad Saiful Azri, assistant district officer at Klang Land Office.

He added that the cows and goats were temporarily sent to a nearby farm.

Saiful reportedly said that the land office and the state government have been discussing Thevindran frequently since 2006 and have even offered a two-hectare plot in Olak Lempit Banting that is larger and more suitable for livestock than the existing parcel.

The star also reported that the MPK had received countless complaints about cows roaming the streets and posing a danger to motorists, while the police said there were reports of vehicles that had accidents with cows.

The report said cow dung left on streets and sidewalks was a curse for the residents, and entrepreneurs have complained of its strong stench.

In the latest development, Sivaranjini said that the five were released on the bail of the police around midnight.