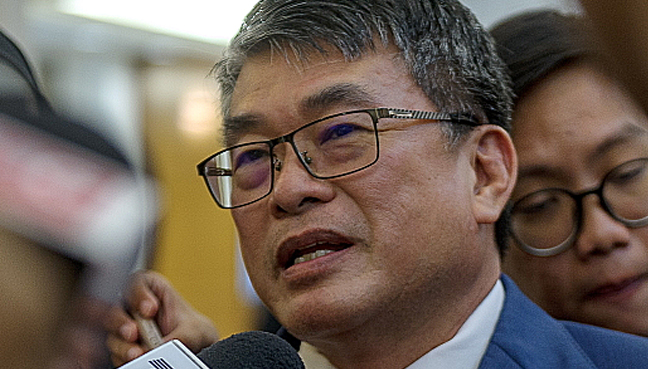 Enemy opponents William Leong and Johari Abdul say that a number of campaign rules are impractical and unrealistic.

PKR Vice President Contender William Leong Jee Keen mentioned the rule against the use of group images in campaign material, and stated that the party's electoral committee should be more realistic. (Bernama photo)

PETALING JAYA: Several PKR leaders have argued for a review of certain campaign policies introduced by the party for the upcoming elections, calling them rigid and impractical.

The new set of guidelines, contained in a PKR circular, bar them from performing ceramahs or large parties attended by more than 100 people. They also block candidates from using group images in campaign material.

"The use of posters, advertisements and other campaign material is meant to introduce the candidate and should only reflect the image of the candidate", explains the circular, which was issued on Sunday and was signed by PKR electoral commission chairman Rashid Din.

Party-vice-president contender William Leong Jee Keen believed that limiting the meeting to just 100 was unrealistic for him, given that they had to consider 800,000 members.

"Looking at the time span that we have, and the fact that it's one member" one vote ", I ask you this: Do you think it's practical that we only see 100 people at once? I do not think that that is practical.

"I do not think that a limited number is needed, why should this be so, as long as the actions do not amount to money politics?"

Leong was asked to comment on the new guidelines introduced by the party's election committee. Candidates who violate these new rules run the risk of taking disciplinary action or are excluded from disputing party questions.

Leong also mentioned the rule against the use of group images in campaign material, and stated that the party election committee should be realistic, as the members had to choose among others the central leadership committee and the division leaders.

"If you are a young person, then there is the PKR youth, and then the Wanita PKR wing, you are talking about choosing hundreds of people, I think there should be some flexibility here," he said.

Johari echoed Leong's sentiments and stated that, while the intent was good, the guidelines were "a bit out of line" as far as usability was concerned, especially the rule limiting the public to just 100 people.

"For people like me I can get media attention, so pressmen can make videos and photos of me and I can appear in the newspaper.

"But can you imagine, for a novice or a newcomer who has no position at all? How do they meet people? It is impossible to limit the audience is impractical, and the election committee should immediately revise these rules," he said.

As far as the group photo's are concerned, the Sungai Petani MP said that the whole idea of ​​having such limits was to guarantee decorum and discipline.

"Hanging up posters and nothing to do with corruption, it shows you admiration.

"I am with Rafizi Ramli (PKR vice-presidential candidate) I want to surrender myself to Rafizi What is wrong with that Why stop? This is a democracy.

"Let them do it, this is not about boy scouts, it's a political party.

"As long as you avoid corruption, smear campaigns, slinging with mud, abuse of government positions and giving goodies or promises, it should be good, you do not have to be that rigid."