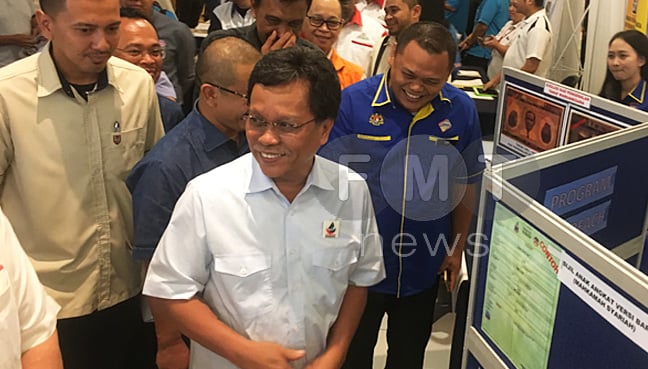 KOTA KINABALU: Prime Minister Shafie Apdal reminded those who criticized his government about the appointment of the Sandakan Municipal Council (SMC) president that the previous Barisan Nasional government had also appointed non-Sabahans as government officials.

He said, however, that nobody had thrown against those agreements.

"How much employment opportunities did the BN government give to millionaires from Sarawak (then)?

"When Musa Aman was the prime minister, many towkays (bosses) of Sarawak (appointed), but no one made any noise then," he told the reporters during a job fair of the Sabah Labor Department here today.

The appointment of Hii Chang Lik as the SMC president drew flak from the audience, especially the opposition, who asked why a person born by Sarawaks was named president.

But Parti Warisan Sabah's Karamunting assembler George Hiew had defended the appointment and claimed that no one had complained about Hii or his status during his tenure as an SMC board member during the BN administration.

The Warisan-led government had also been criticized for the appointment of water engineer Amarjit Singh as director of the Sabah Water Department.

Shafie said it was important to "put the right person in the right place".

"These people have the right expertise, from the water department to the SMC, and we are convinced they have the capabilities and experience," he said.

The president of Warisan noted that Hii's opponents no longer have to question his status as a citizen born in Sarawak, because he was already a permanent resident in Sabah.

"He has been in Sabah for 40 to 50 years, and if we doubt his origins, it will become a problem.

"There are even people of" orang putih "(Western) descent but now serving as senators," Shafie said, without mentioning anyone specifically.

He said, for example, that Long Pasia, one of the most domestic areas in Sabah, needed water, good roads, hospitals and better education.

"I will certainly discuss with Mahathir other things we have demanded." Of course, he mentioned the Sabah population that is small in number compared to the peninsula, but Sabah is larger in size.

"What's important is that we can not deprive our people of the necessary things, I know it's an investment that we want a return on, but we also have to save the people," Shafie said.

Mahathir had assured that the government would give fair treatment to Sabah and Sarawak and would not make any distinction between policy and development implementations in the two states and those in the peninsula of Malaysia.