The roof of the Bukit Raja toll square collapses 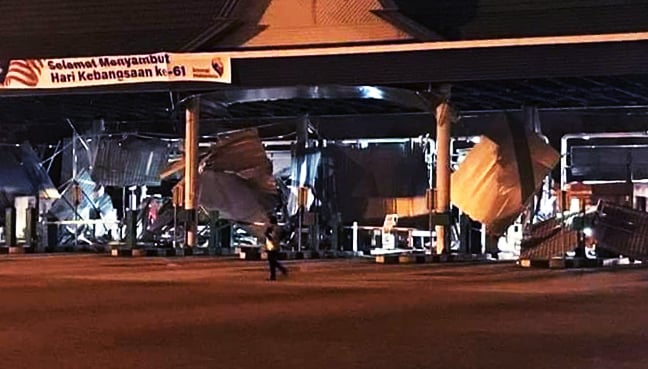 Cause of the incident has yet to be determined, but strong winds may have been a factor.

The scene behind the roof of the Bukit Raja toll plaza collapsed. (Facebook photo)

PETALING JAYA: The roof of the Bukit Raja toll square near Klang collapsed tonight, which brought traffic to a standstill.

Based on a video that made the rounds on social media, the incident happened around 9:30 PM.

The debris was strewn on the road, making it difficult to drive through.

A voice on the broadcasting system forced road users to stay away from the toll booths.

PLUS later took it on Twitter to encourage drivers to use alternative exits that had been opened.

Bernama reported that the toll square on the NKVE Expressway was closed for all vehicles.

Selangor, head of the traffic investigation and enforcement department Supt Azman Shariat, said the incident caused traffic congestion of about 1 km in both directions.

"Vehicles from Shah Alam were diverted to the Setia Alam-toll square and Klang vehicles had to reverse the route from Shah Alam to Klang on the left with three lanes.

"At the moment cleaning work is being carried out by the PLUS Malaysia Bhd," he said in a statement here.

PLUS, in a statement, said that part of the ceiling at the Bukit Raja-toll square had collapsed as a result of a storm, making it inaccessible.

The statement added that the original PLUS study showed that no victims were reported on the toll plaza, involving staff or highway users.

PLUS also advised the public to follow the PLUSTrafik twitter service for the latest traffic information on the Bukit Raja toll plaza.