We have not forgotten Orang Asli families 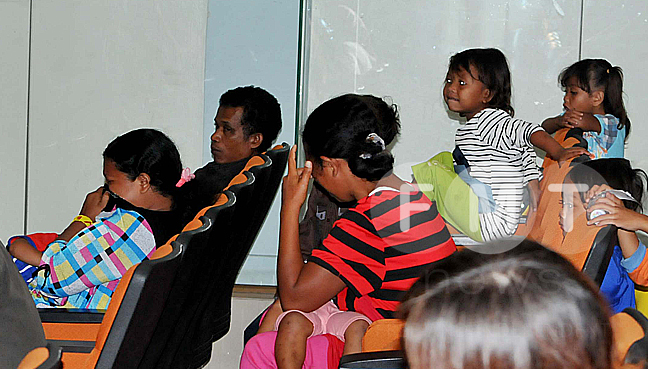 KUALA LUMPUR: Three years after the tragedy of SK Pos Tohoi, in which five schoolchildren died, the trauma and pain of the families are still very tangible.

One of those visibly affected was Midah Angah, 41, who lost her son, Haikal Yaakob, in the tragedy. While her daughter survived Noreen, she is no longer the same person and she refuses to talk a lot.

Midah could only say a few words before he gave up and cried uncontrollably during the press conference organized today by lawyer and activist Siti Kasim. When she saw her crying, the attendees also began to sob incessantly.

& # 39; Noreen has suffered a lot. She saw that the body of Juvina was torn by monitor lizards. She refuses to talk a lot. She is no longer a happy child.

"I hope the government understands the hardships of these families and increases the level of care in the school system," Siti said at the press conference here at the KL and the Selangor Chinese Assembly Hall (KLSCAH).

Seven children ran away from their hostel in SK Pos Tohoi on August 23, 2015. This is believed to be for fear of reprimand by their teacher for bathing in a nearby river without permission.

Of the seven only Noreen Yaakob, 13 and Miksudiar Aluj, 14, survived the ordeal, which lasted 47 days.

The other five, consisting of the younger brother of Noreen, Haikal, together with Ika Ayel, 9, Juvina David, 7, Linda Rosli, 8 and Sasa Sobrie, 8, died in the jungle.

Of the five, the remains of Sasa were never found. All others were buried in a single grave in Kampung Penad, Gua Musang, on October 25, 2015.

Traumatized, Noreen and Miksudiar have stopped going to school. As for the parents of those who died, the tragedy remains new in their memory.

"We have not forgotten," they said.

Messrs. Ayel Ajip, Rosli Alik and David Kuasan, whose children were killed in the incident, demand that schools be built in the interior so that they do not have to send their children to distant boarding schools.

Ayel said before the incident, he had no problems sending his daughter to the school because he thought of her future.

"The government has to build schools in the interior, and the authorities also have to know that young people, at the age of seven, really do not know how to wash themselves, to wash their own clothes or shoes," he said.

David, who is the father of Juvina, remembered the time spent looking for the missing children and how the teachers were not helpful in informing the parents about what had really happened.

He also called for schools to be built in the interior for their underage children, because it was very difficult to send their children to distant boarding schools.

"We thought about their future, we rarely see our own children because the school is far and we do not have cars. Even if we were to walk, it would take one or two days from the village to the school, "he said.

David also pointed out the need for teachers to understand the Orang Asli people in connection with an incident that occurred when he was 10.

"When I went to school one day, a teacher asked me for my name in Bahasa Malaysia.

"The teachers must understand us, even if we have gone to school, we may not necessarily understand the language," he added.