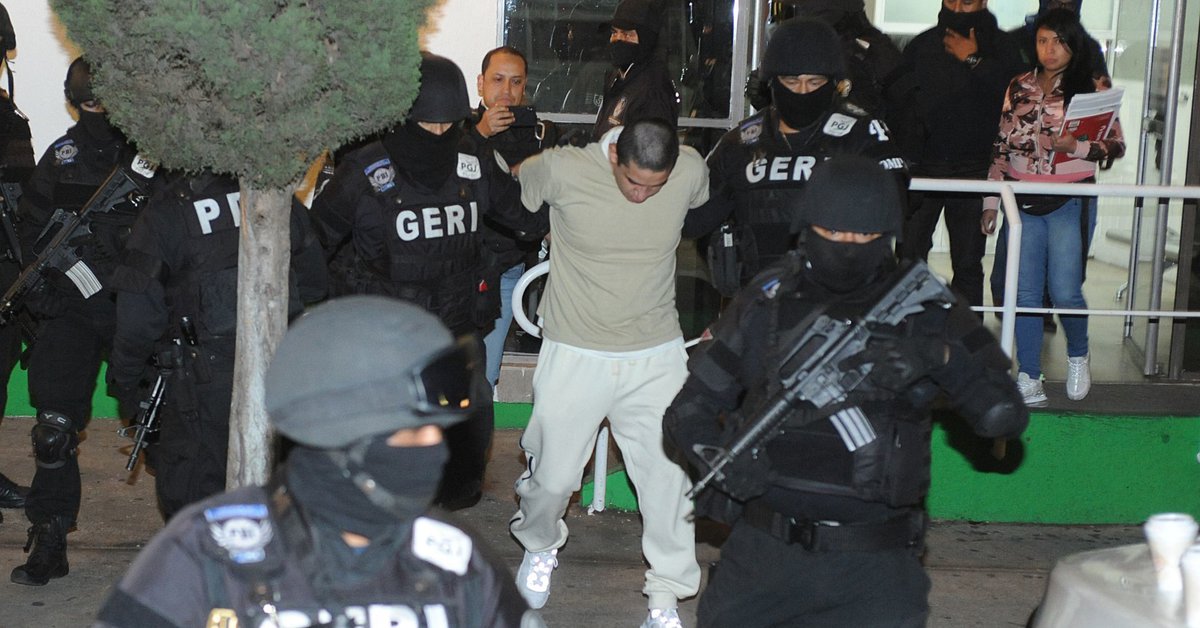 The Union Tepito, a criminal group operating in Mexico City, has shown its reach with the world of entertainment, especially television, good models and program participants they are linked together as partners of local drug traffickers.

Murders, alleged drug trafficking, money laundering and dating relationships they have manifested among drug traffickers and at least six members of the programs Fall in love Y Acapulco Shore, from Tv Azteca and MTV, respectively. Two of the show’s characters were killed, one was arrested on November 25, while the rest follow their lives of fame.

Manelyk González Barrera, Mane or the unfaithful Agaporny, was the girlfriend of David Garcia Ramirez, The pistachio, head of La Unión Tepito. The influencer, model and singer became famous after participating in the MTV program Acapulco Shore from the first season.

Mane recognized to have a relationship with The pistachio, considered the successor of Roberto Moyado Esparza, leader of the Tepito Union. But after the so-called ‘strawberry trader’ was arrested on October 30, 2018, The 31-year-old young woman from the capital said her courtship ended five years ago and was unaware of his partner’s illegal activities.

Now, González Barrera has engaged in music, after participating in other programs such as Resistiré or Super Shore, while maintains her relationship with fellow influencer and singer Jawy (Luis Alejandro Méndez González), his partner in the reality MTV, where the crush came from.

The pistachio it is established as a hit man and drug dealer, appointed lieutenant in the Polanco district, was detained on March 5, 2017, charged with murder, but only spent a month in prison, as he was acquitted three years ago on April 10. Used to be It is common to see him in bars and clubs in La Condesa, Polanco, Roma and Zona Rosa, accompanied by Mane.

This leader went unnoticed by his lifestyle and designer clothes. He reportedly extorted restaurateurs, business people, nightclub owners and that would have been linked to a network of trafficking in women. He was held in a condominium in Santa Fe and is in prison and is continuing his trial for organized crime activities.

During In the first season of Acapulco Shore, Mane called her boyfriend, whom she called Pistachio. A tweet from him, published November 8, 2014, referred to the fact that no one would know the identity of that nickname.

Gaby Castillo, participant in the Enamorándonos program, was associated in an affective relationship with Óscar Flores Ramírez, The Polka Dots. Earlier, would have been a couple from Mauricio Hidalgo, The chicken, The Union Tepito hitman was shot on July 25, 2019 at the mayor’s office of Venustiano Carranza.

Known as La Pomps or La amorosa, the influence came to light in 2018 in the program of Tv Azteca, which was meant to bring people together to find love.

While the influence she remains active as a model and stylist, The Polka Dots He is in prison in the north, where he is on trial for his links to drug trafficking and murders, among them, that of purple “N”, a woman responsible for increasing positions in the market of Tepito who was shot in the face in July 2019. The member of the local criminal faction was arrested on January 31 this year, accused of extortion, kidnapping, drug trafficking. He was a supporter of satanic rituals.

For his part, Gaby Ruiz from Acapulco Shore was, even in a love affair, connected with Manuel Iván García Llerena, for photos where it appears next to her. On June 9, 2018, the murder took place Garcia Llerena, The flea, completed at the entrance to your home. He was considered second in command The Union Tepito. His death was part of a bloody war against the Anti-Union.

Nataly Michel Rodríguez Romero, from the Enamorándonos program, was murdered in May last year, in his house in the 20 de Noviembre district, the office of the mayor of Venustiano Carranza. Strangulation marks on his neck, alleged cause of death.

The chicken, Once a partner of Gaby Castillo, she was the prime suspect in the crime, as this member of the Tepito Union is said to have been in charge of collecting the large sum of money that the young woman and another participant on the show was owed for the sale of narcotics. About the research about the murder would also mention Mane and its relationship with The Polka Dots, according to the document marked with the classification FCY / 3 / UI-1S / D / 01480 / 12-2019.

Rodríguez Romero barely stood out on the Tv Azteca program, he went on to air on some occasions as “arrowed” to go out with one of the participants, called “the loving one”. However, the relationship with the “lover” did not go beyond two dates. His neighbors found the body when warned by the foul smells emitted from the corpse’s decomposition.

Brian Del Prado, who also participated in the Enamorándonos program, was murdered on November 30 last year. Two test subjects on a motorcycle intercepted him as he left a bar in Coyoacán, at least 10 bullets hit his body. She had met a friend at the Madeira on the roof. They were both in a Nissan pickup when two men shot and killed the MVS Noticias Training Center voice over student.

This participant It was also linked to the alleged drug trafficking link with La Unión Tepito, to be murder is part of the same folder as his partner’s in the show, Nataly Michel. After committing the murder, those responsible took refuge in the so-called Barrio Bravo, stronghold of the criminal group. A picture of him, with the Pistachio’s ex-girlfriend, It caused a stir, as it showed that Del Prado had visited Mane for his birthday, something that indicated proximity, despite the fact that it belonged to different programs.

It was last Tuesday, November 25, when the chief authorities were arrested Harold Steve Quezada, Costa Rican model, who also participated in the Enamorándonos program. It was Arrested for being an alleged Tepito Union blackmailer. His participation took place three years ago and there he would go out with one of the participants, with whom he met members of the criminal group.

He started working for the cartel that “put” people he knew, so that their accomplices extort or extort money from them. They also know he traded guns and drugs. When he arrived in town, Harold Quezada had a few tattoos: one on his arm and another on his shoulder. But when he devoted himself to crime, decided to tattoo his face. As he said, it was for “look more motherfucker”.

According to the files of the Citizen Security Secretariat (SSC), now he was blackmailing merchants. Elements of the SSC found it in the Colonia Santa María la Ribera. He was selling drugs to another man. They caught him with 50 bags of marijuana and 40 bags of cocaine.

Last July, rPress releases emphasized that Roberto Moyado Esparaza, el Betito, leader of the criminal faction in jail, would have confessed to laundering money for programs such as Enamorándonos and Acapulco ShoreIn addition to sponsoring the appearance of various models in television programs with the alleged knowledge of the owner of Tv Azteca, Ricardo Salinas Pliego, which has not been denied or clarified by the tycoon.

The dominion he forged The Union Tepito in Mexico City its members have access to a world of luxury in the style of famous drug traffickers and transnational Mexican cartelsHolidays in Europe, designer clothes, exotic animals, high-end cars, private homes and even Ming dynasty vases were the examples. Like other capos, the above references are examples that their links also pertain to the realm of entertainment.

According to the report of the Secretary of Security, the faction dominates in the mayorship of Cuauhtémoc. Especially in the colonies of Manuel Doblado, commanded by Lalo Ramírez Tiburcio, the Chori; Centro and Lagunilla with Víctor Hugo Ávila Ramírez, de Huguito in front; Peralvillo, Morelos and Tepito, whose leader would be Cristián Emanuel Flores Ramírez. In these demarcations, they commit extortion, drug trafficking, house collection and assassination attempts, as well as intimidation of merchants. Another leader is Dilan Alexis Chávez, de Wedding.

Three years ago he appeared in the program “Enamorándonos”, yesterday he was arrested and appointed as a blackmailer of the Tepito Union

She is Gaby Castillo, participant of “Enamorándonos” and alleged girlfriend of “El Lunares”, leader of Unión Tepito

Designer clothing, exotic animals and even a Ming Dynasty vase: luxury and gaudy among the Unión Tepito drug dealers

Coup to the Tepito Union: they arrested “Nicho”, father of “El Lunares” and chief operator of the cartel