Map of the coronavirus in Mexico on Nov. 27: CDMX doubled the incidence for the fourth consecutive day

mexico November 27, 2020 mexico Comments Off on Map of the coronavirus in Mexico on Nov. 27: CDMX doubled the incidence for the fourth consecutive day 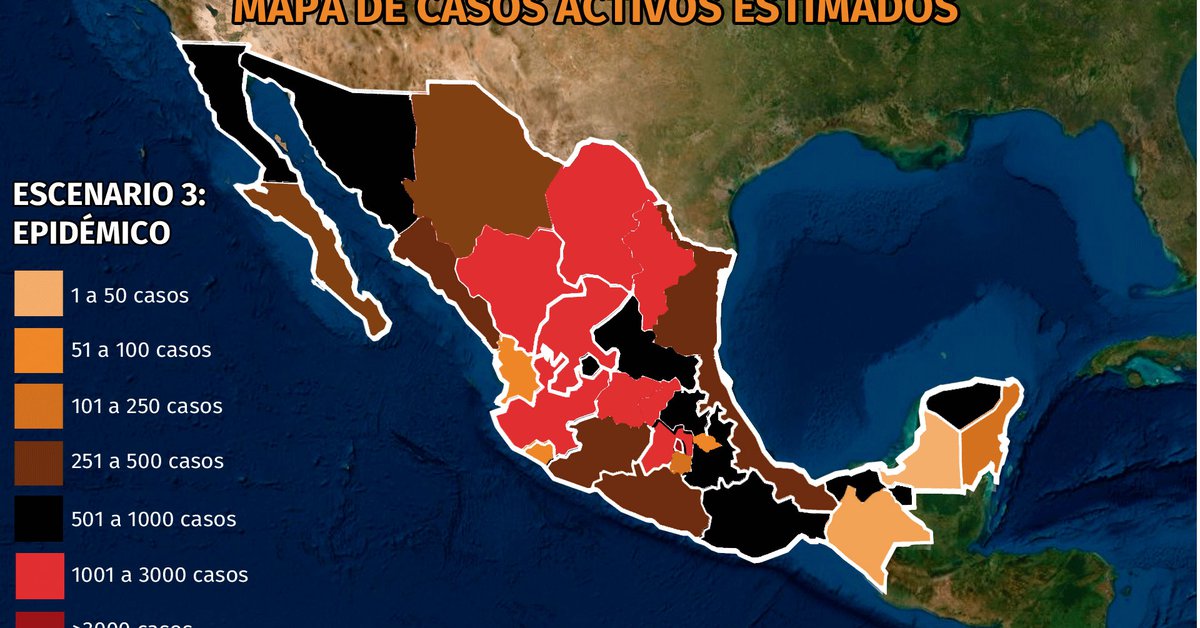 The top 10 entities with the highest number of cases are: Mexico City (18%), the State of Mexico, Nuevo León, Guanajuato, Sonora, Coahuila, Jalisco, Veracruz, Puebla and Tabasco, which together account for about two thirds (62%) of all cases recorded in the country.

Mexico City and Guanajuato are the entities with the highest number of active cases (> 3,000 cases), followed by Nuevo León, State of Mexico, Querétaro, Durango, Jalisco, Coahuila and Zacatecas, such as entities with more than 1,000 active business, which together account for more than two-thirds (67%) of the country’s active business.

If you want to be informed about the most important things, register here and we will send you the news immediately.

Hugo López-Gatell, Undersecretary for Prevention and Health Promotion, announced what the percentage of people who tested positive for COVID-19 was 46% at week 46.

In addition, it reported that an estimated 56,104 patients (4%) had symptoms in the past 14 days, that stands for people who may contribute to the transmission of the virus.

In Mexico there was a decrease from week 45 to 46 (-) 5% in estimated cases (sum of confirmed and suspected infections) at national level, count 1,247,079 until this Wednesday. the same 798,037 people were reported recovering from the disease.

“In the last week of July we reached a maximum point, then the curve started to go down, this means that the cases from one day are less in number than the previous and we hit the local minimum in the first week. October Later it started to increase, it showed a general upward trend, although there was a five percentage point decline at the time, ”the official said.

Concerning the deaths caused by COVID-19 disease, The SSa reported that, from weeks 45 to 46, a decrease of (-) 4 percent.

According to official data, up to the last cut, The entity with the highest occupancy of general hospital beds is Durango, because it has a saturation of 75 percent.

To care for patients in a critical situation due to COVID-19, Mexico City has an availability of 39%, Aguascalientes with 43%, Zacatecas with 49%, Nuevo León with 50% and Baja California with 52%.

The undersecretary recalled that the SARS-CoV-2 virus poses a greater risk to people who suffer from chronic illness, who are 60 years of age or older, pregnant women and other vulnerable groups. He noted that “as far as people have symptoms of COVID-19, fever, cough, headache, don’t wait and get a medical evaluation as soon as possible”

By state entity, Mexico City is the state with the highest number of confirmed cases so far in the epidemic, reporting 193,819 total.

Similarly, in active infections, the country’s capital is the entity that tops the list, followed by Guanajuato, Nuevo León, the state of Mexico, Querétaro, Coahuila, Durango, Jalisco and Zacatecas, as they concentrate more than half ( 67%) of active business in the country.

Coronavirus in CDMX: Why the Worst Would Come in December and January

2,000 volunteers are going for the CanSino COVID-19 vaccine in CDMX