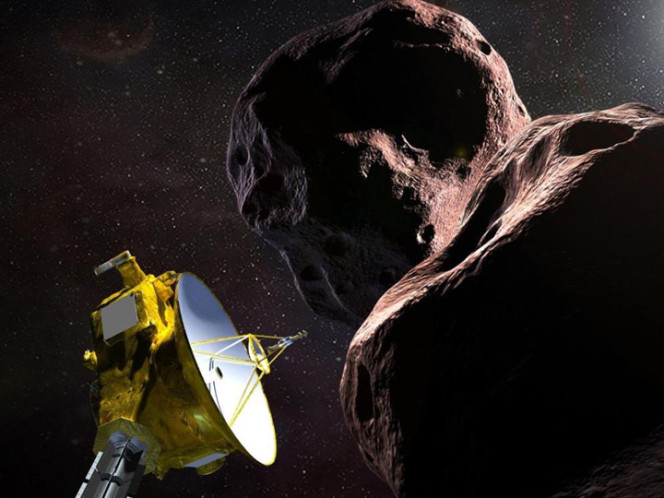 Ultima Thule was the name chosen by the public in a call from NASA. Photo taken from the Twitter account: @JimBridenstine

the NASA today revealed the first concrete details of the farthest celestial body ever explored by humanity, Ultima Thule, located in the Kuiper belt about 6500 million kilometers from the sun.

Prior to this mission, the team, led by scientist Alan Stern of the Southwest Research Institute, weighed the idea that Ultima Thule was the union of two different planetary objects.

The scientist at John Hopkins University, Hal Weaver, said that today it is a single asteroid with a shape similar to a peanut or a bolus, after seeing the latest images of Ultima Thule, still of a very low resolution.

That's pretty common with the tiny celestial bodies of the solar system, "Weaver said at a press conference after receiving the first signal from New Horizons after completing the mission.

According to Weaver, this form would explain another mystery of this distant celestial body: the brightness variations.

Stern clarified at the press conference that the Panchromatic photos with a higher resolution do not arrive until February, about.

The leader of the mission took the opportunity to congratulate everyone's work the members of the New Horizons team, whose job he described as excellent.

The New Horizons team ensures that it looks easy. That's not it. This team has worked hard for three and a half years to make this possible. And what we can see, they got a score of 100%, "said Stern, who announced that they are going to write the first scientific article about the mission this week.

Ultima Thule, which was the name chosen by the public in a call from NASA to name the known object as 2014 MU69, comes from a term of Greek origin used by Roman and medieval geographers to indicate a place "located beyond the known world".

Although the overflight to that rocky asteroid took place at midnight distance of about 3500 kilometers from the object, the first sign of New Horizons after completing it arrived at 10.30 local time in the Deep Space Network Tracking Station, based in Madrid.

This happens because Ultima is Thule 6 hours and 7 light minutes from the earthas explained by one of the people in charge of this mission.

Another challenge of this space mission is to determine the duration of the rotation of the small asteroid in itself, only 30 kilometers in diameter.

According to the latest findings, scientists believe that that rotation lasts between 15 and 30 hours, in the absence of more data to confirm this hypothesis.

Ultima Thule is located in one of the most remote areas of the solar system, known as the Kuiper Belt, in honor of the astronomer who predicted his existence in the fifties, Gerard Kuiper.

The ship New Horizons he was six months of hibernation until June this yearwhen he resumed his journey to this mysterious celestial body, barely 30 kilometers in diameter.

The scientists and astronomers in charge of this mission hope that the information collected by New Horizons will contribute to a better understanding of the formation of the solar system and how the planets were built.