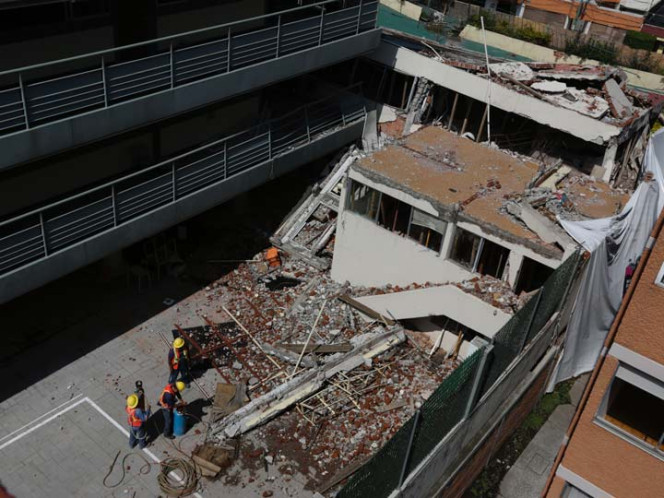 By judicial mandate, with the assistance of the investigation police, photographers and forensic experts from the office of the Prosecutor General of the capital, parents and staff of the Ministry of Works of Mexico City started the partial demolition of the building of the school Enrique Rébsamen which is located at number 11 and 19 of Rancho Tamboreo, New oriental colony, Delegation of Tlalpan.

In spite of the annoyance from neighborsbecause they complained We were told that they would start work today and by the closure of the street had to remain in their houses, about 12 hours and 35 minutes went some of the experts, who waited more than four hours outside the property, to start the procedure after it had been deposited and limited the maneuvering perimeter.

After he had done it twice postponed the demolition of the school, because of the fierce resistance that the parents of some of the deceased students had, on the grounds that it was demolished, would be an obstacle to the investigation into the irregularities with which the school worked. Finally the demolition work was allowed.

The Deconcentrated Fiscal of Investigation of the PGJ in Tlalpan, Alicia Rosas Rubí, confirmed that today the work starts for the demolition of the building and that the research is still ongoing for the crime of guilty murder.

After a agreement with the majority of the parents of the victims mortals began to work to remove the plates from the affected area.

The agreement (with the parents) is that it is not the total removal but only the fence that borders the neighbors and the collapsed area.

The appointment to enter the address is scheduled because will introduce several experts who have to intervene and they need access to the base.

The right to the truth means that you have access to the part of the building that has collapsed, where the offices of the director were located where you could have proof that the research portfolio serves.

It is well known that there was corruption (when granting building permits) and there may be documents that can support this accusation, "said Noé Franco, legal representative of the parents of the victims.

The litigating party also noted that the family members are aware of the removal of the rubble benefits for seeking justice, to find documents or signs that can be buried.

The work started with the removal of the tapial (near improvised wood) and a new boundary of the perimeter on Rancho Tamboreo street around the site for the maneuvers of the crane and heavy machinery.

It should be remembered that Juan Mario Velarde Gámez, one of the directors responsible for the work (DRO) of the Enrique Rébsamen school, was arrested by agents of the PGJ and detained in the South Male Preventative Prison where the crime accused of culpable homicide have given permission for the functioning of the school campus.

And for the same crime is looking, Monica Garcia Villegas, owner and director of the Rébsamen.