Capture incredible images of the power of rain in Nuevo León 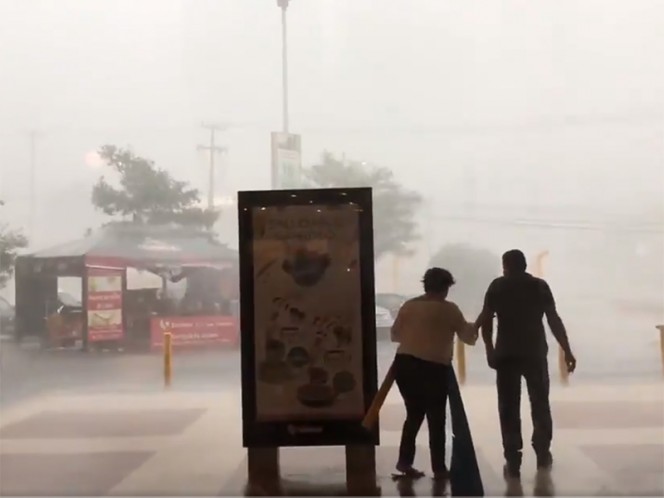 The precipitation left the overflow of a brook, flooded streets, power outages and the evacuation of a shopping center – Photo: Twitter @mezmen

Pictures were published via social networks that drew attention to the power of rain and strong wind which were presented this Sunday in Monterrey, Nuevo León.

The rainfall that took place in Monterrey and its metropolitan area, left the overflow of a stream, flooded streets, power outage and the evacuation of a shopping center.

So the rain ebb the area tops of Monterrey pic.twitter.com/ZYeb9PK4SM

The arrived rain was accompanied by strong gusts of wind and hail.

The tower guard on San Jerónimo Avenue, in Monterrey, tries to stop the glass doors after heavy rainfall. pic.twitter.com/5Tv1MZBu3g

In social networks, the expulsion from the Plaza Urban Village, located on Garza Sada Avenue and Arroyo Seco, Monterrey, because the roof was damaged by heavy rainfall.

In Santa Catarina, the passengers of a unit were stuck so it was necessary to save them while the El Capitán brook flooded and the water level reached the asphalt of Morones Prieto.

Strong storm #Monterrey I needed rain like this pic.twitter.com/akhGWyuggp

State Civil Protection reports that so far there is no report of injuries.

These rains arrive in Nuevo León after the absence of precipitation for several weeks and the issue of water shortage due to the low level of the dams and the lack of rainfall.