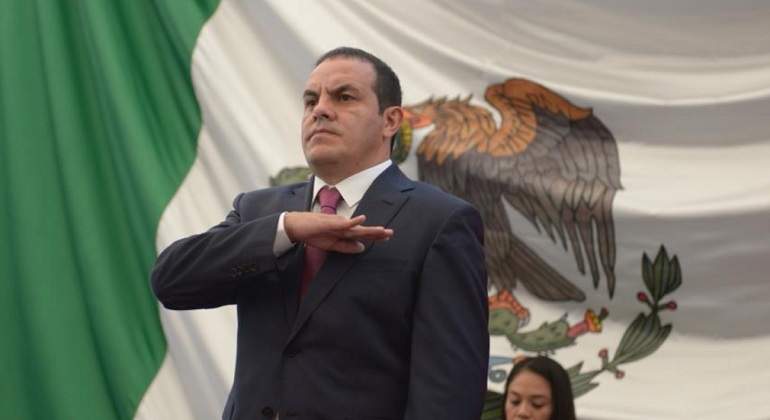 Former footballer Cuauhtémoc Blanco Bravo protested at the Plaza de Armas of Cuernavaca as constitutional governor of the state of Morelos for the period 2018-2024.

We embarked on a phase of major transformations for Morelos, I know that a bright future is waiting for us, we have started big challenges but with total dedication; I will reign with heart and humility. pic.twitter.com/wZ4kQB0mOQ

One of the priorities of who was the standard bearer of the parties Morena, Social Encounter and Work (PT) are subjects such as post-earthquake reconstruction, security enhancement, improvement of public services, transparency and zero corruption.

In desks with specific topics of the process of reception – reception of incoming and outgoing governments, said the coordinator of the Liaison Committee of public administration 2018-2024, Jose Manuel Sanz Rivera, that the reconstruction of houses and schools is priority for the Government of Cuauhtémoc Blanco.

The governor-elect also met with Alfonso Romo Garza, head of the office of the president in the government of Andrés Manuel López Obrador, with the aim of launching programs that benefit the people of Morelos and to to work in a coordinated way.

After presenting the institutional logo of his government, he said that he will promote projects for all citizens, and he will work to obtain the greatest number of resources and benefits through the programs that are available to the federal government , to advance the entity.

Similarly, he said that he would raise the issue of security, as it was one of the main promises he had made to Morelenses during his election campaign.

In this sense, the arriving Governor of Morelos presented last August 30 to the deputy admiral of the General Staff, José Antonio Ortiz Guarneros, as head of the Ministry of Public Security.

Ortiz Guarneros announced that his personal secretary would be Captain Mario Isaac Vargas Santomé and the Undersecretary of Operations, Captain of Marine Infantry, Federico Rivas Valdés, with whom he will draw up a work plan that will reduce the high levels of insecurity in the state.

According to data from the provisional election results program (PREP) of the Morelse Institute for election processes and citizen participation of Morelos (Impepac), Blanco Bravo fought for the position of governor of Morelos with seven candidates and achieved victory as a result of the elections of the past Sunday 1 July 2018.

As standard bearer of the Social Encounter, Morena and Partido del Trabajo (PT) parties, he obtained 373,600 votes, representing 52.4 percent of the votes in the state elections. For what he received from Impepac on 8 July 2018, the majority record was Morelos' agent

Cuauhtémoc Blanco Bravo was born in Mexico City on January 17, 1973. He worked for more than 20 years as a professional footballer in various teams in Mexico, Spain and the United States; Later he started a political career and from 2015 to 2018 he was mayor of Cuernavaca.