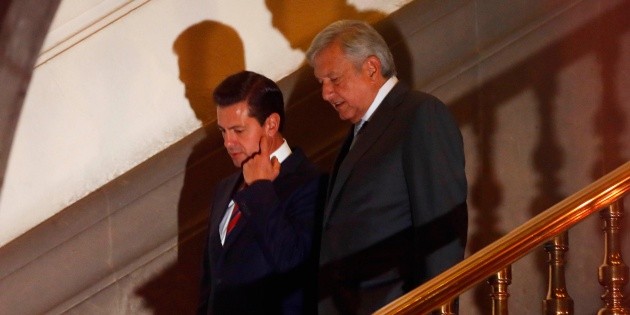 The president of Mexico, Enrique Peña Nieto, and the elected president, Andrés Manuel López Obrador (AMLO), made clear their differences yesterday about the continuity or not of the educational reform, during the first meeting of the transition teams. "I want to make it clear that the current education reform will be canceled and will be replaced by another one," remarked the Tabasqueño before the eyes of Peña Nieto, the driving force of the constitutional amendment, during a press conference that both celebrated in the National Palace.

Peña Nieto opened the floor by emphasizing the "openness" and "willingness" of his government to give information to his successor so that he "can start his management successfully". In the same way, López Obrador emphasized the climate of "cooperation" for the transition: "We are very satisfied and thank the President (…) for this institutional gesture of respect and cooperation".

Disagreements emerged during the question-and-answer period of the press, as a large part of the issues concentrated on the future of education reform, which implemented measures such as the evaluation of teachers.

López Obrador replied that at that moment a "different plan" will be announced that takes into account the position of teachers and parents. "As long as this does not happen, we will abide by what is laid down in the laws and we will respect the constitutional mandate."

He argued that the reform could "be much improved". "We have to convince, do not beat, there is no educational reform for teachers."

The revision and eventual withdrawal of the reform will be part of the legislative agenda that will push the Morena caucus into the Senate, according to Cristóbal Arias Solís.

In another event, the exliders of the National Union of Education Workers (SNTE), Elba Esther Gordillo appeared yesterday and also emphasized that the educational reform had collapsed. And he reiterated his support for the teachers, though he avoided avoiding the detailing of his future.

While Juan Diaz de la Torre, the current president of SNTE, asked for "respect" at the beginning of the school year and said he was "calm, as always" before the return of "La Maestra", López Obrador threw it away as part of his team in the next federal administration. However, "your rights will be recognized."

About this subject, President Enrique Peña Nieto has ruled that Gordillo was a political prisoner.

President Enrique Peña Nieto clarified that with the incoming administration there is no different than disagreements about issues such as the educational reform and the new international airport of Mexico, but he will respect the decisions that the new government is taking at that moment.

In a joint press conference with Andrés Manuel López Obrador, Enrique Peña Nieto made it clear that the works for the construction of the new airport will continue and the educational reform will be further applied in the conditions laid down in the Constitution.

In the Patio de Honor of the National Palace, he explained at the end of a meeting with their respective transition teams that the construction of the new air terminal is "in progress, because contracts are awarded to construction companies."

"This (the construction) has not stopped, it goes further in terms of what was contracted and established as an obligation of the government", he said, remembering that these works began with the knowledge that it would be a transexual project, so the incoming government, based on its own mechanisms, must decide whether or not to continue as established.

He stressed that investors should be aware that the country is going through a transition process, although the current and following government teams have worked to give them more certainty. He also pointed out that the educational reform will be applied in terms of what the Constitution establishes, until finally the corresponding legal changes are made.

He said he was certain that his government and those led by López Obrador are searching for "young people have free, secular and quality education. There is no difference of opinion, but visions (different) about how this goal can be achieved. "

Moreover, he ruled out that the legal process that Elba founded Esther Gordillo was a political persecution, as considered by the former leader of the National Union of Teaching Workers (SNTE).

"It is intolerable and unacceptable to say that the teacher, whose career is publicly known and the lawsuit against her, is dealing with political persecution, and there was never a personal or specific grudge for who was the leader of SNTE."

also, He claimed that his government is leaving a country with political stability, because today it "deprives it of harmony and social peace", although he acknowledged that there are regions of the country that still have a high degree of of insecurity, subject that poses a challenge for his administration and also for the incoming. Although there was progress "there were not enough to provide certainty". Public security, "more than qualifications", is not only a matter for the federal government to solve, but is a responsibility of the three levels of government, so every administration must take responsibility.

"I have regained my freedom and education reform has collapsed …"

Elba Esther Gordillo, former leader of the National Union of Educational Workers (SNTE), appeared yesterday during a public event with teachers, in the context of the return to lessons in primary education.

He accused that there was a "political persecution" against him by the current government, "False accusations to make me look guilty of something that I have not committed". And it showed a legal agreement with the media. "I am innocent, I got freedom again and education reform has collapsed."

"The teacher", who was imprisoned for more than five years, said that there was "betrayal" to teachers who "had to defend them and did not do it".

Gordillo, 73, He apologized to the teachers for the "political and mediated persecution" they suffered and they "tried to break their employment victories". He confirmed that the magisterium was a "scapegoat".

"I regret that those who had to defend us did not do it and betrayed us."

Accused of diverting two thousand 600 million pesos from union funds for personal gain, he regretted that the current leadership of SNTE leads to "self-destruction" of the union. "In every corner of Mexico, in every public school, the trade union crisis is observed". That is why he asked to restore the "strength" of yore.

And he extended his hand to Andrés Manuel López Obrador: "The world and our country are immersed in a profound transformation and we have received a great public lesson." He insisted to act "without resentment for the past", for the "welfare of the homeland".

"The people and we all have to live this new phase in the history of Mexico." And she defined herself as a "warrior in peace".

Yesterday Andrés Manuel López Obrador assured him that he would respect Gordillo's club life. "Elba Esther's right to participate must be respected, do not intervene in the internal affairs of the trade unions, we want unionism."

During the meeting at the National Palace of the Government's Transition Teams, the Tabasco confirmed that "Elba Esther will not work in the next government, and as citizens, they will recognize their rights in the use of their faculties, but no one will be outside the law. We have to convince, do not win, we have to take the teachers in. No educational reform can be done without the teachers. "

Who accompanied yesterday "The teacher"?

Surrounded by her relatives, employees and teachers from different sections of the SNTE, Elba Esther Gordillo appeared again.

Two weeks after her release, accused of money laundering and organized crime for the use of trade union contributions, she was accompanied by her sister Martha Gordillo; his daughter, Maricruz Montelongo; his son-in-law, Fernando González; and his grandchildren: René Fujiwara, Othón de León and Tadeo González, alongside his great-grandsons Emiliano and Regina.

She was also accompanied by a few former leaders of the SNTE, such as Rafael Ochoa Guzmán.

In small groups were representatives of Baja California, Veracruz, from the Mexico Valley, from Mexico City, from section 9 and 10.

How do they see me? Quietly: Juan Díaz

The President of the National Union of Workers of Education (SNTE), Juan Diaz de la Torre, asked "respect" at the beginning of the school year and said he was "calm, as always," before the return of Gordillo Morales.

"How do they see me?" Quietly, in peace, as always, there has never been a moment of relaxation in the union, and everyone who takes up this challenge of being a union leader at every level is the same every day. "

He noted that he will only address the problem when the SNTE is listed immediately and that the organization will then issue a commentary with responsibility.

There are aspects of improvement, Ayón accepts

In order to improve the education policy of the country, the next government should listen to the approach of all concerned, said the Minister of Education of Jalisco, Francisco Ayón López. He acknowledged that educational reform has many aspects of improvement. He felt, however, that this was a big step in the teaching model, so some issues would have to go on, however controversial as the evaluations might be.

"Personally, I am convinced that the evaluation should continue to measure how teachers do it. We will have to say: "Let's remove that punitive article that hurts the teachers of non-permanence." "And instead, he said, generated training to measure the work of teachers to provide quality education.

Because the evaluation of performance led to many disagreements, he noted that the teachers' requests would be transferred to the corresponding agencies: "you will have to set up discussion boards to generate where this aspect should be, which is the most complicated for teachers in the reform ".

With regard to the opposition's examinations for the access and promotion of teachers, he said that although there are no problems, it is necessary to make adjustments in order to have more order.

Section 16 of the SNTE made an official request to Governor Aristóteles Sandoval Díaz to agree to the national coordination of professional education services in the following topics:

1.- That every teacher has appealed to the evaluation, but decides not to take part, this decision is respected without any influence.

2.- That every teacher who has not been called up for the evaluation and decides to take part, can be included in a previous training.

3.- That the adequacy and efficiency in the payment of the incentives of all teachers are expected and guaranteed, obtain a high result in the evaluations.

What do you think of the cancellation of education reform in Mexico?