Give the last goodbye to Kevin, younger bitten by a violinist pin 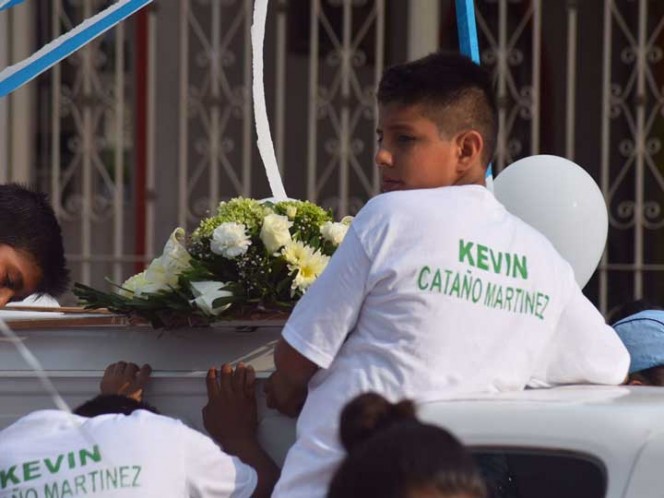 It was given with white balloons and between applause the last goodbye to Kevin, the 10-month-old baby who was bitten by one violinist spider in Acaponeta, Nayarit.

The residents participated in the grief of their relatives who accompanied them to the Municipal New Pantheon.

Very sad, because it leaves us marked in our path of life, because this case has never been seen and I really regret this matter and I come because I have a child and I realize it reflects me, "said Jazmin Partida Orozco, one of the inhabitants.

The children of the place and their family members dressed in white shirts with their names on their back, in honor of the small one warrior who fights for his life until the last moment.

The loss of the child is unhappy, all people are very sad about that and because if you have to be strong and have to move forward and the mother must be strong for her other baby, for the one who has her family, we give her the more sympathy and to move on, "said Ana Lilia Espinoza Rodriguez, another of the people who accompanied the family.

His mother, Rubí Martínez at all times since his birth, did not leave him, on the way he lost moments of pain before the departure of his son, while his relativesThey wanted to encourage to go on.

Anayeli Palacios Castañeda, cousin of Kevin's mother, was one of the people who donated blood to the boy who hoped he could resist the spider poison.

To help that child recover a bit, but alas, because Kevin fought hard for his life and because the truth lost the battle, "said Anayeli.

Today, Acaponeta, Nayarit is in mourning, little Kevin left a void, not only in his family, but also with his inhabitants.