I am innocent … today this warrior has peace: Elba Esther Gordillo 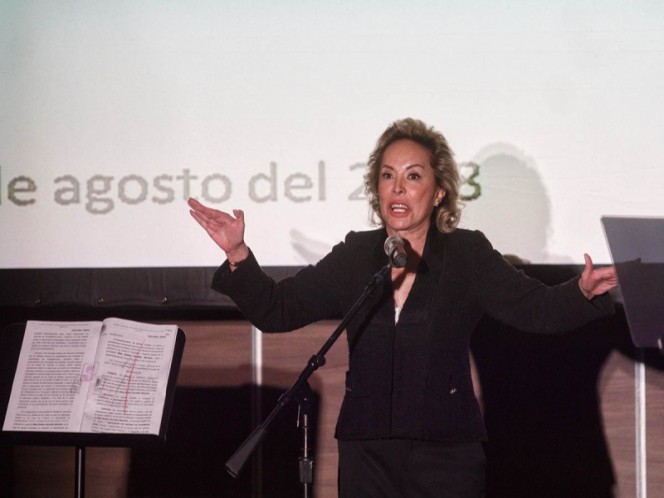 When he regained his freedom, the education reform collapsed and Monday Elba Esther Gordillo Morales convicted

ATo restore his freedom, the educational reform has collapsed and was condemned Monday by Elba Esther Gordillo Morales, former leader of the National Union of Education Workers (SNTE).

During her first public appearance, after her release for the crimes of organized crime and money laundering, the teacher confirmed that her future was marked with her freedom.

I am innocent. I show you the legal solution that it recognizes. I got my freedom back and the education reform & # 39; collapsed.

I want this moment to mark my future, my hope and my hope, "said the teacher, to the applause of about 200 followers who managed to enter the room where he offered a message.

I got my freedom back and the educational reform has collapsed: Gordillo

At 11:00 o'clock, as announced by his lawyer Marco Antonio del Toro, on 8 August, in the morning, Professor Gordillo Morales went through one of the emergency doors, to give his message of 12 minutes.

The former magistrate described as a perverse orchestration the accusations that brought her into jail for 5 years and 11 months.

I did not shy away from any risk, I did not accept unworthy conditions. They spared no resources or ink from a media interest, to treat me with a hardness that only a perverse orchestration could reconcile, "he said.

He has peace and betrays magisterium

The former magistral leader wore a black suit and sneakers and described himself as a warrior who has peace and offers an apology to the teachers who have been persecuted and betrayed by her.

It is better to conquer yourself than to win a thousand battles; Today this warrior has peace. For the teachers of Mexico, I offer an apology.

I regret that they are subject to political and media persecution aimed at defeating their conquests and disrupting the union, "he said.

Gordillo Morales pointed out that during this period of his confinement, the teachers were chosen for the evil that plagued the country and was betrayed by those who would have to defend them.

He also regretted that some of the attitudes attributed to me contributed to our being an easy target; a scapegoat who was blamed everywhere; but above all I regret that those who had to defend them did not do this and betrayed us, "said the teacher, and again the applause of her supporters was released.

Gordillo Morales said that in these years SNTE is confronted with a crisis that stems from the self-destruction to which it was subjected, without naming names.

The SNTE has lived a long and complex history, but never, never before, self-destruction as a result of aversion. In every corner of Mexico, in every public school, a trade union crisis is observed.

We were a strong and self-determined organization. It is necessary to face the moment and rediscover its power with greatness of spirit, but with power, because as teachers of education we are obliged to organize it, "he said.

About what her future in political and professional life will be, teacher Gordillo has only announced that she will stand on the side of the teachers.

In my case I will exercise my freedom, knowing that my loyalty and my place has always been and will be the side of the teachers of Mexico, and of the defense of public education.

In the immediate, I owe mine, which suffered my absence, without implying that I had to give up my beliefs, "he said almost at the end of his message.

Earlier, in connection with the start this Monday of the 2018-2019 school year, starting with the new education model of the reform, the teacher called the teachers to give the best of themselves and support the students, before the civil lesson that happened in the country, with reference to the election result of the last July.

I ask the teachers of Mexico to make the best of themselves as always. Give yourself to the children with the peace of mind that their concerns should now be heard. The world and our country are immersed in a profound transformation and we have received a great public lesson.

What comes next must be carefully considered, without obsessions and without hatred; without resentment for the past and thinking about the future, always working for the well-being of the country. The people and everyone must be in this new phase ", Gordillo Morales said.

After completing her message, the teacher was helped to leave the classroom, while teachers applauded and cheered and cheered.