In the Palace of Palenque, discover the underground and mask of the Mayan king Pakal 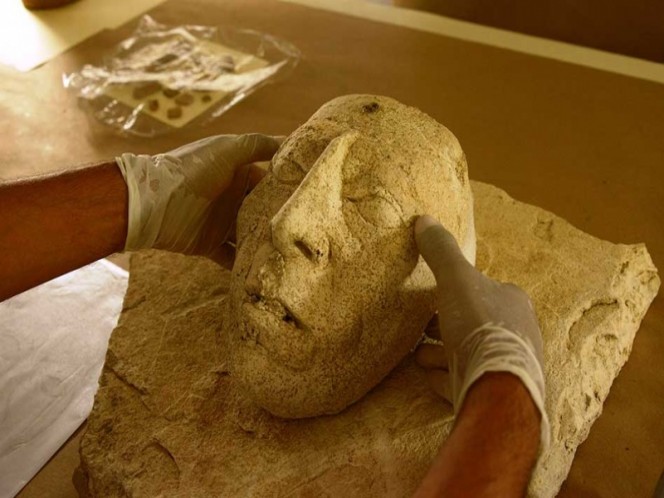 A mask modeled in stucco that is considered the Pakal ruler; a nose ornament, unique in its kind, and an underground passage, are the recent findings that the INAH made in the houses of El Palacio de Palenque.

Together with the above, an endless number of remains of animals such as turtles, rodents, crabs, fish and other aquatic fauna were discovered; as well as minerals and other elements that are part of a huge Mayan offering; linked to the decoration of the nasal bone, as shown on the media.

The person who was responsible for the conservation and restoration works that produced these fruits in May last year was the archaeologist Arnoldo González Cruz, and the restaurateur Haydeé Orea Magaña; the first mentioned that these findings correspond to the Late Classical Period (684-720 AD) of the Mayan culture.

Earlier, during the press conference, the general director of the National Institute for Anthropology and History (INAH), Diego Prieto Hernández, stressed that This is a supplement to dozens of findings that have accumulated in recent years thanks to the research supported by the National Council for Culture and Art and by the Ministry of Culture.

He stressed that Palenque is one of the most researched archaeological sites that makes a more tangible approach to history possible; to which a large number of people long for information and knowledge of the vast Mayan universe, and there is still much to discover.

These leaders who appear in Palenque give us very important clues to understand the structures of the government and everything that meant the confrontations between the great centers of Mayan power in the classical period, "he said.

He said that the first phase of the conservation work was the result of the support of the Ambassador Fund of the State Department for Cultural Conservation (AFCP, for its acronym in English), of 500 thousand dollars.

The works started in January with the aim contain the conditions caused by the weathering and the local fauna; together with the integral preservation of the roofs of houses A, B, C, D and E of the architectural complex known as El Palacio, where the figurehead appeared

Arnoldo González confirmed that in house E of the architectural complex, the work was focused ensure the accumulation of water in the patio that filtered the water during the rainy season and caused moisture problems in the buildingso that the floor was scraped, the level of which was comparable to the bay of the building.

So it was that what was supposed to be a pond and in the background the stucco that Arnoldo González regarded as a figure of human nature, because it is not fantastic or represents a God; also found the statuettes, ceramic remains, ships and bones of fish associated with the down payment.

With regard to the metro, he indicated that it is part of the building systems, which is a substructure in House C that no one expected and makes them think they can be present in some other buildings.

For its part, the State Secretary for Cultural Diversity and Promotion of Reading, Jorge Gutiérrez, said that visitors to Palenque, an area that deserves the highest recognition, reach one million 300 thousand people each year, a figure that increases.

This morning the archaeological zone of Palenque dresses up, even more than usual, on the occasion of the discovery of a beautiful stucco mask in the architectural complex called El Palacio, so again the city gave a report of its Exceptional and well-preserved remains.

While the Minister of Tourism of the state of Chiapas, Mario Uvence Rojas, agreed Palenque is one of the most emblematic sites for the identity and pride of all Chiapanecans.

It is a sure sign of the great work that INAH is doing, the mask that was found during the architectural preservation work in House E of El Palacio, symbolizes the rituality of the Mayan past, but also the eternal encounter of our past, the preservation of the current strength of Mexican people, "he concluded.