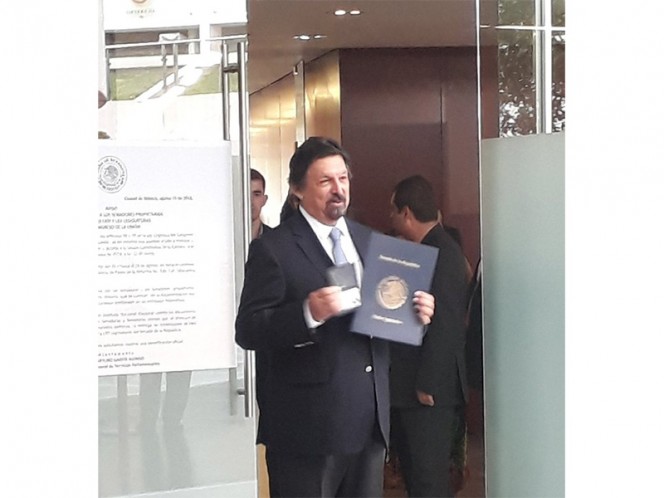 Although procedural immunity, known as fuero, it will have until Wednesday when the Senate is formed, Napoleón Gómez Urrutia He was accredited as an elected senator, to work over the next six years to help the country rebuild & # 39; and to fight against & # 39; corruption & # 39 ;.

Self-banned since 2006, when a lawsuit broke for the loss of $ 54 million from the members of the industrial union of national workers of mining, metallurgy, steel workers and similar workers of the Mexican Republic, in the same year of the tragedy of the mine of Pasta de Conchos, Napoleón Gómez Urrutia arrived yesterday at the headquarters of the Senate, in Insurgentes and Reforma.

He entered the cellar, the parking lot of the senators, and went to the area known as Lost Steps, where the secretary general of the parliamentary services, Arturo Garita, received it for the delivery of proof that access to the Constituent meeting of the Senate, to be held on Wednesday 29 August at 12.00.

Shortly after 4.30 pm the leader of the miners arrived in the Senate. He spoke to Garita, took the photo for the diploma and then gave a short tour of the entire senate. At that time PAN Rafael Moreno Valle arrived to process his accreditation. But the ex-governor of Puebla never came face to face with Gómez Urrutia, because when the mining leader returned to the accreditation area to pick up the evidence, Moreno Valle was in the plenary meeting.

At the request of reporters and with the help of Alberto Díaz, deputy director of logistics, Napoleón Gómez Urrutia agreed to show his credentials for the camera's and although he said he would not make any statements, because on Thursday press conference, he said he is "very happy to be back to my homeland."

And a question on his agenda, said he will assist in the reconstruction of the country.