Rains leave chaos and eight floods in the CDMX 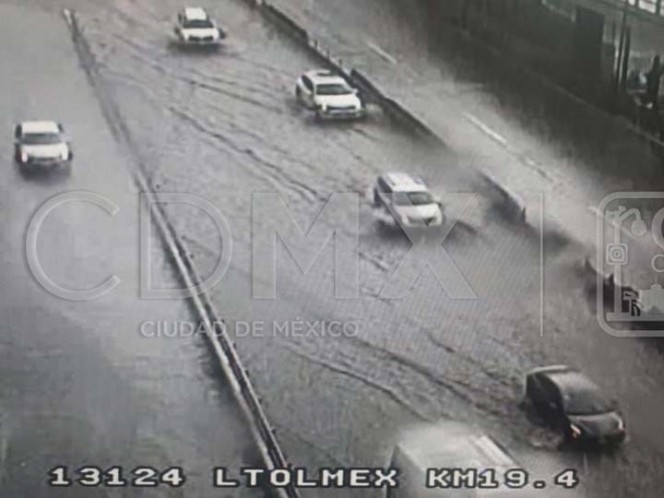 The rain of yesterday caused at least eight flooding, 11 flooding, three water drops and effects on the road network that ensured traffic and service public transport Slow from Mexico City.

The most affected delegations were Cuajimalpa, Miguel Hidalgo, Tláhuac and Xochimilco, according to the monitoring of the capital.

One of the most affected colonies was Jesús del Monte Cuajimalpa.

in Tlahuac There were at least four floods that required the attention of emergency teams from institutions such as the Fire Department, Civilian or Water System.

One of the flooding occurred at the intersection of the Reforma Agraria and San José streets in Colonia La Habana; another in Juventino Rosas and Agustín Lara in Colonia San José and another in Doctor Juan Palomo and Calzada de Tláhuac-Tulyehualco in Colonia San Andrés.

Yellow alarm for storms activated in 13 delegations of the CDMX

The final recording took place in José Bernal and Avenida Tláhuac in the Colonia El Triángulo.

Three floods were registered in the Xochimilco delegation. One of them on May 5 and Rey Tizoc, in the city of San Luis Tlaxialtemalco.

Another one on November 20 and Avenida México, Colonia Huichapan, very close to the Light Rail facilities that worked with security march and a third on Avenida Aquiles Serdán and Cuauhtémoc, in Colonia Quirino Mendoza.

In the delegation of Cuajimalpa at least two intense water droplets and one flood have been reported.

A descent of water in Monte Naranjo and Ahuehuetes. And another in Avenida Jesús del Monte and Monte Encino.

In addition, one flooding on the Mexico-Toluca highway and San José de los Cedros, all these attacks in Colonia Jesús del Monte.

In Miguel Hidalgo, one of the biggest damage was caused by flooding in Prado Sur and Boulevard de los Virreyes, Colonia Lomas de Chapultepec.

While in Tlalpan a downpour fell with hail and thunder that caused a drop of intense water on the Picacho-Ajusco Highway.

The civil protection secretariat reported, at least, 11 flooding in arteries such as Tláhuac Avenue, Cuemanco Circuit, South Prado and other secondary streets.

And I activate the yellow warning for Tláhuac, Xochimilco and Cuajimalpa.

The Collective Transportation System reported that it had to activate the safety circulation due to rain in at least three of its lines, 2, 3 and 8.

The National Water Commission predicted this through the National Meteorological Service Strong rain will continue on Tuesday.

Chaos in #CDMX for rain this Monday https://t.co/WnMokGaeSw