The authorities will change, but the institutions will remain: EPN 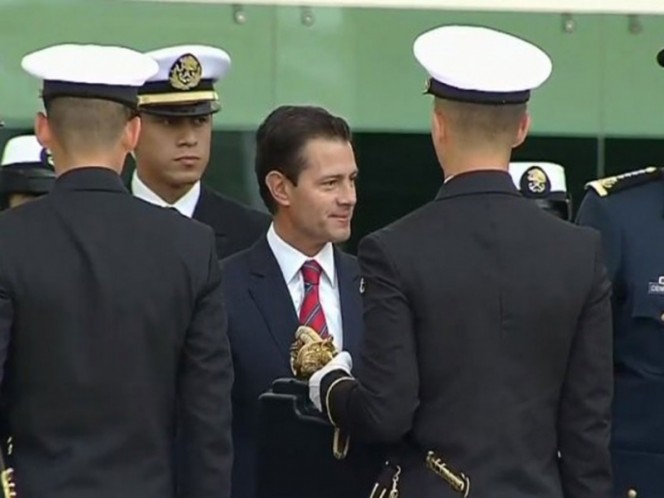 President Peña Nieto led the inauguration of the Center for Naval Studies in Health Sciences on Friday (photo Twitter: @PresidenciaMX)

As a result of the election process in the past, government authorities and visions will change, but institutions will remain, Confirmed President Enrique Peña Nieto this Friday, when he graduated from nurses and marine doctors, at the marine navy secretariat of Mexico (Semar).

On 1 December, the federal executive power is transferred to a new owner, the authorities, the programs and even the visions of driving to the country will changebut the institutions and especially the values ​​that unite and identify all Mexicans will remain.

For members of the Army, Air Force and Navy of Mexico, it is their duty to continue to act in accordance with the highest standards of military and naval services; I mean the tradition of honor, duty, loyalty and patriotism that distinguishes our soldiers, pilots and sailors"Said Peña Nieto.

In the courtyard of the Center for Naval Studies in Health Sciences, which was inaugurated this Friday, the head of the executive force emphasized that the armed forces will continue to honor its institutionality.

As Supreme Commander of the Armed Forces, but also as a citizen, one of the values ​​that I admire the most is its unchangeable attitude, which I'm sure will continue to honor and glorify in the coming years.

In the framework of the democratic regime we have entered into, independent living for more than two centuries, let us continue to give the best of ourselves individually and join the efforts in the collectiveworking alone and looking forward will continue to improve and strengthen our large community home: Mexico, "said Peña Nieto.

President Peña Nieto led the inauguration of the Center for Naval Studies in Health Sciences on Friday, in the Center of Naval Superior Studies (Cesnav) of the secretariat of Navy Armada of Mexico (Semar).

also gave recognition and titles to 78 graduates of Naval Medical and Nursing Schools who were done with their training.

The Naval Studies Center will integrate the new facilities of Naval Medical, Naval Nursing and Postgraduate Schools in Health, with a capacity of 740 students.

During the ceremony the director was accompanied by the secretaries of the national defense (Sedena), general Salvador Cienfuegos Zepedaand from the marine of the navy of Mexico, admiral Vidal Francisco Soberón Sanz.