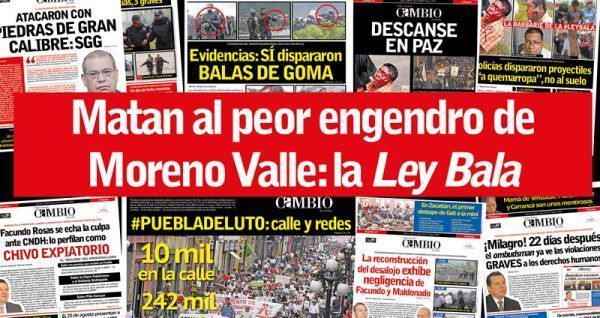 The first legislative act of the sixtieth legislature, the controversy of which was part of the explicit procedure that was carried out, was to kill the worst employee of the management of Rafael Moreno Valle: the 'Bala Law & # 39 ;. The deputies & # 39; barbosistas & # 39 ;, with the support of the other banks, agreed to the repeal of this order, thus the use of & # 39; non-lethal & # 39; weapons to the police became possible during demonstrations

In the first legislative act of the sixtieth legislature, with controversy incorporated by the express procedure that was carried out, the deputies approved the abolition of the well-known "Bullet Law", which used the use of "non-lethal" weapons to the police during demonstrations allowed, leading to the murder of the child José Luis Tehuatle in July 2014.

It was this Monday during the first ordinary session of the new legislature when the legislator of Social Encounter, Monica Lara Chávez, presented the initiative for the "Law on the protection of human rights & # 39; and to regulate the legitimate use of force by the elements, to withdraw from the State Police institutions & # 39 ;, which was sanctioned on May 19, 2014 with 32 votes of the Morenovallist deputies of the Fifty-Fiveth Legal and two months later the death of José Luis Tehuatlie Tamayo, 13 years old, caused by a rubber bullet impact in the skull during the confrontation between residents of San Bernardino Chalchihuapan and the state police.

During her speech in the gallery, Lara Chávez requested the dispensation of the trial to vote on the revocation of the "Bullet Law" because it was a matter of urgent solution for the people of Puebla.

It is worth noting that the coalitions Morena, PT and Encuentro Social, from the coalition Together We Will Make History, were supported from the outset by the representatives of New Alliance, Gerardo Islas Maldonado and Jonathan Collantes.

Controversy in the legislative procedure

He was the coordinator of MC deputies, Carlos Morales, who asked his colleagues in Puebla at the Front to support the dispensation of the legislative process to vote in the same session on the order to use of violence legitimizes. public to discourage demonstrations with non-lethal weapons.

The coordinator of the PRI caucus, Rocio García Olmedo, spoke out against the procedural exemption and argued that the lawmakers outside the We Are Do History block did not forward the project to them because they were in the discussion had discussed general issues, so described the & # 39; barbosista & # 39; procedure at the time the waiver of the & # 39; Bullet Act & # 39; was supported, as a legislative & # 39; albazo & # 39 ;.

Given the position of Rocío García Olmedo, the chairman of the board of directors, José Juan Espinosa Torres, filed a lawsuit with the PRI to ensure that the organic law of Congress allows lawmakers to vote at the time of presentation , any type of initiative without the need to be employed.

Therefore, the coordinator of the representatives of the PAN, Marcelo García Almaguer, joined the claim of the lawmaker of the tricolor, where the lawmakers of Juntos Haremos Historia were accused of having acted at the beginning of the legislature without any technical strictness , since they did not report earlier for the rest of the legislators when presenting this initiative.

Recognize unanimously the lifting of the Bala Law

After the discussion in the plenary stand on the dispensation of the procedure, the request to deliver the corresponding legislative procedure was supported by Morena, PT, Social Encounter, PRD, Commitment by Puebla, New Alliance, Citizen Movement and Green Ecologist. There were a total of 30 votes in favor and 11 against, issued by the PRI and PAN delegates.

When the confrontation was over, the initiative of Juntos Haremos Historia was sanctioned by the 41 delegates to the "Law on the protection of human rights & # 39; and which regulates the legitimate use of force through the elements of the national police institutions.

This proposal received the support of the Morenovallistas deputies from the block of Por Puebla at the front, although after the death of José Luis Tehuatlie because of this law, proposed by Rafael Moreno Valle, the former president sent an initiative to scrap it, document that by the deputies of the 50th Legislature to your "freezer" & # 39; of the Legislative Party was sent with respect to your project.

During the session, Rocío García Olmedo and José Juan Espinosa Torres held the first debate on the new legislative power of the State Congress, when the local deputy of the PRI held a & # 39; albazo & # 39; of the Morenoist block and accused of not following the procedure to discuss initiatives, since those presented in general matters had not previously been notified to the legislators.

"His message was surpassed in setting positions that do not match the personality he holds as president of the Board of Directors, you need to ensure balance, you have to prevail over the general interest of Congress on group interests," he also said. . García Olmedo.

The PRI referred to Espinosa Torres must follow the corresponding procedure to vote on the proposals of the coalition Together We Will History, which were approved in the first session with a majority.

In response, the local deputy of the PvdA thanked the recommendation of Garcia Olmedo and said: "I will take note and use my right, I am very sorry that they did not propose to you to occupy this presidency, be sure that we act with full use of our rights and in full awareness. "

The discussion was not there, because the tricolor legislator presented his complaint in the gallery and again requested that the new delegates follow the steps to submit their analysis initiatives.

However, José Juan Espinosa asked for his arguments to be completed and not to disqualify the performance of the board. Previously, the legislators of Morena, PT and PES went out of their way of applause for the former mayor of San Pedro Cholula.

"With all due respect, nobody can get reprimanded in their utterances, you do not have to do it to me. What I'm specifying is what you just read, Article 151 is of opinion, not of the withdrawal initiatives," insisted García Olmedo. 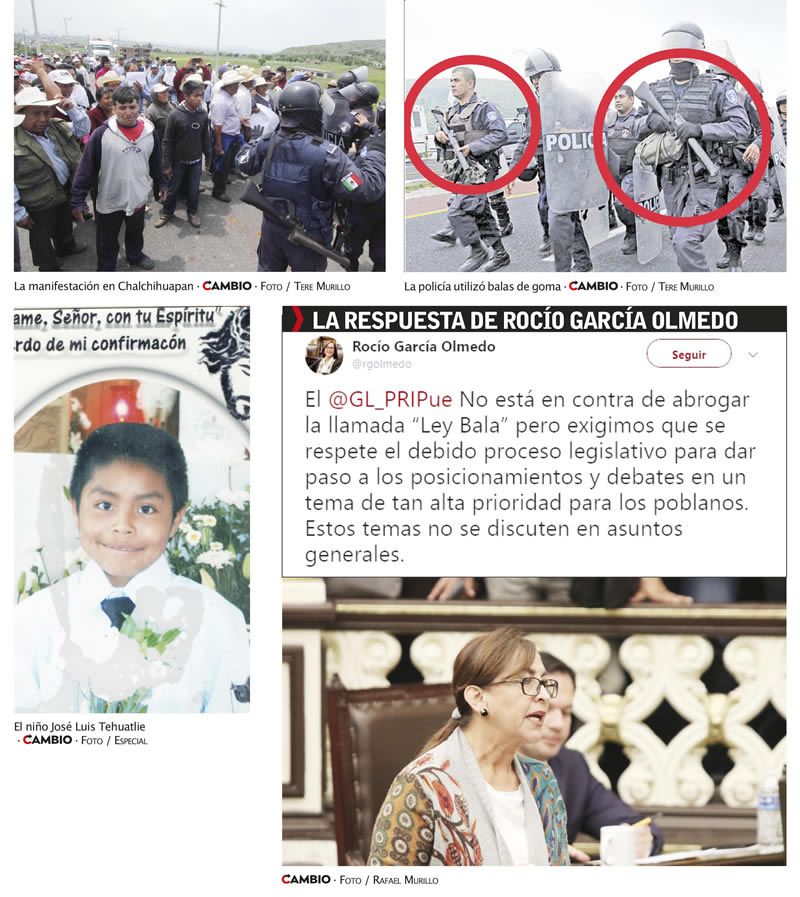