The demolition of the Rébsamen begins; the owner is still fugitive: PGJ 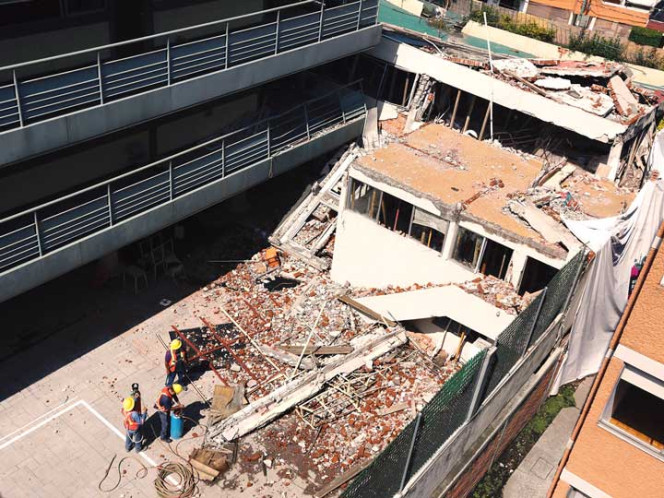 Yesterday, the most affected part of the school Enrique Rébsamen looked like this. During the demolition of the fence that borders on nearby houses, the MP will monitor the works, as well as the parents. Photo: Paola Hidalgo

More than 11 months after the earthquake on 19 September began the demolition of what the school was Enrique Rébsamen, based in the Colonia Nueva Oriental Coapa, delegation of Tlalpan. This ended after work on 13 August, for the second time, at the request of the parents of the victims.

At 7:30 a crane arrived on a truck, they covered part of the street Rancho Tamboreo and blocked the parking entrances of at least six houses in the neighborhood.

The capital government already has the approval of the parents to remove the cement slabs from the campus that collapsed during the earthquake, as they run the risk of moving and influencing the neighboring buildings, said the head of government, José Ramón Amieva.

The agreement with the next of kin was that the total removal would not be carried out, only the fence next to it.

Amieva reiterated that the demolition has no influence on the research that continues because they have all the results of experts.

Alicia Rosas, the deconcentrated prosecutor of the investigation in Tlalpan, went to the site and made the search for Mónica Garcia Villegas, owner of the school, continues.

Edmundo Garrido, lawyer, said the Public Prosecution Service will permanently check the chain of custody during the demolition. The parents will also supervise the actions so that there is no problem with everything that is extracted from that retreat.

-With information from Luis Pérez, Georgina Olson and Gerardo Jiménez