They find a lifeless, lost priest in Michoacán 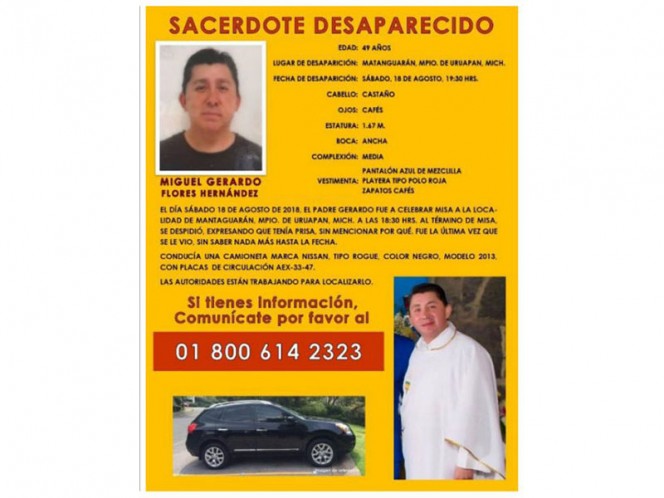 Miguel Gerardo Flores disappeared after attending the Mass in the Matanguarán community, in Uruapan; his body was found in Tierra Caliente (Photo: Special)

The Catholic priest reported missing since last Saturday, August 18 in the municipality of Uruapan, Michoacán, was found dead today.

The body of the presbyter Miguel Gerardo Flores Hernández, 49, It was located in Nueva Italia, municipality Múgica in the Tierra Caliente zone, in a place known as Antiguo Molino de Arroz, on Benito Juárez Street, according to the Attorney General of Michoacán, who made it known through a statement.

The PGJE indicated that the priest's body was in an advanced state of rotting at the time of its location; the father wore clothes other than those indicated in the missing person's file.

The way he died has not yet been reported by the authorities of the state or by the Archdiocese of Morelia.

The Archdiocese of Morelia, also issued a bulletin where they expressed the pain of the news of the death of the original priest of Sombrerete, Zacatecas,, which belonged to the order of the Missionaries of the Holy Family, located in the municipality of Zamora.

The Catholic Church ensures that the Flores Hernández promised his eternal vows in this community and was ordained in the year 2007. He currently served as Parochial Vicar in the Parish of Santa Catarina of Alexandria in Jucutacaro, he was also responsible for Nazareth, Center for family child and youth training.

Miguel Gerardo Flores disappeared after attending Mass in the community of Matanguarán, in UruapanAt 6.30 pm the parishioners reassured the superiors of the father afterwards, who said goodbye because he had a different connection without saying which one. They indicate that he always spent the night in the community.