They find in Palenque mask of Pakal El Grande 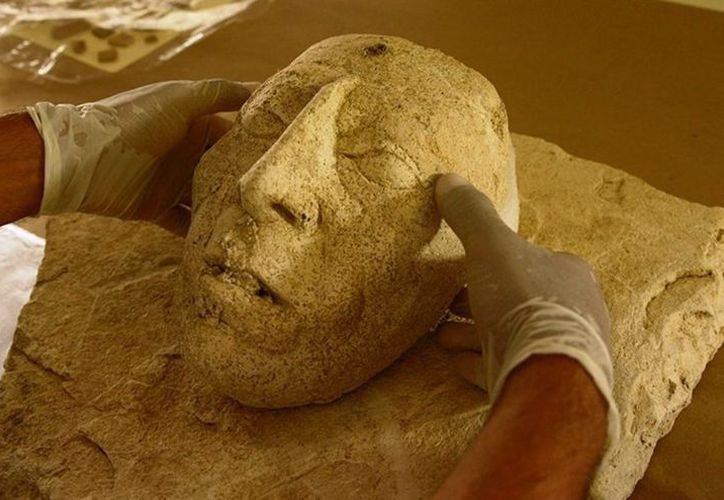 agency
CITY OF MEXICO.- As a result of research and preservation work in the archaeological zone of Palenque, in Chiapas, led by the archaeologist Arnoldo González Cruz, known for its research into the grave of the Red Queen– a stucco head of the famous Pakal II ruler, an ornamental nosepiece and a tunnel in house C of the architectural ensemble of the palace were discovered.

It is believed that the mask could represent the facial features of K & # 39; inich Janaab & # 39; Pakal II (603-683 AD), ruler of Palenque, who led his lord to one of the most powerful and opulent the western Mayan area since the political and military viewpoint, informs the news portal of the journal Proceso.

You may also be interested: No more plagiarism with Zara! INAH protects indigenous designs

The discovery was announced by Jorge Gutiérrez, secretary of culture; Diego Prieto, director of the National Institute for Anthropology and History; Carlos Morelos, branch president of Palenque, and Carlos Suárez Deputy State Secretary for Culture in that entity.

The sculpture with the face of Maya ruler, also called Pakal El Grande, was in House E of the architectural complex of El Palacio, next to a ritual depot of ceramics and aquatic fauna, while working on tackling problems of water accumulation in the courtyard of the monument.

The archaeologist, who has been working in the area for years, explained that the mask is distinguished by a thickening in the mouth, which could mean that Pakal II is in its old age. It is also known that Pakal lived until he was 80 years old and reigned until his death:

"It should be noted that, unlike other Mayan sites where representations are generic, in Palenque many of the functions we see in mural or stone carving are true reflections of specific characters," said archaeologist Benito Vengas Durán, who collaborated with Wenceslao. Urbina Cruz also participates in the research project.

In the sacrifice that accompanied the stucco were figurines, ceramic shards, carved bones, jadeite fragments, mother-of-pearl objects, obsidian and bone remains of sea creatures such as turtles, fish, lizards, crab claws, snails, in addition to birds. While in house C the nose piece was found.

INAH also said that the works are part of the first phase, which started last May, of a integral protection project that the institute realizes with the support of the United States embassy in Mexico, via the Ambassador Fund of the State Department for Cultural Preservation (AFCP, for his abbreviation in English), which also includes the restaurateur Haydeé Orea Magaña.

During the announcement of the finding it was also reported that in 2019 houses B and D are visited and in 2020 house A, with funds from the US government. It will also launch a monitoring of Pakal's burial chamber, considered the most striking in Mesoamerica, with new technologies that would allow a virtual visit to the site, "without jeopardizing this important heritage resource", restaurateur.