They tackle the forgery with a new $ 500 bill 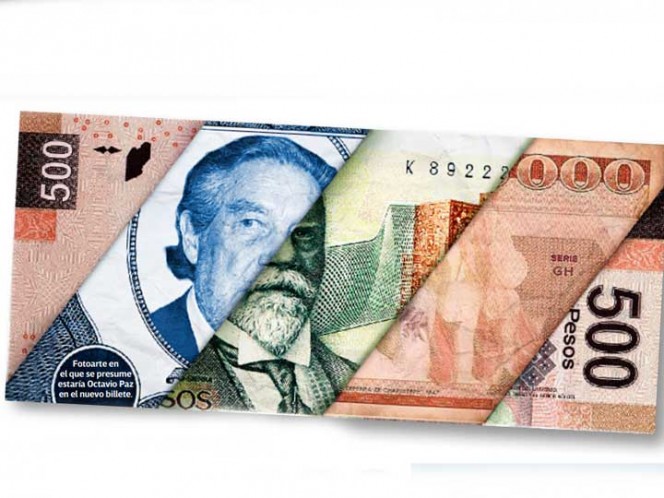 the Bank of Mexico will present tomorrow the new 500 pesorekening, denomination that is the greater circulation between all accounts and that is the preferred counterfeiter.

For this reason it is speculated that Bank of Mexico Banknote Factory print the new payment method in polymer, ie plastic, as it does with 20, 50 and some commemorative coins 100 pesos.

Although the average cost of making a plastic ticket is greater, compared to the average cost, less than a peso, of making a cotton bill (the current material used to make the 200, 500 and 1,000 pesos), The money polymer has the advantages that it offers more resistance to circulation and is much more difficult to forge.

The manufacture in plastic would be a good defense of the proverbial "quiñón", because it is the denomination of tickets that are more abundant for cash transactions in the economy.

Banxico's indicators show that there are currently 2,000 212 million 500 peso units in circulation, while a thousand pesos are only 78.8 million pieces and 200 pesos 897.3 million.

By the paper money The central bank rejoices the memory of characters from the history of Mexico, among those who have emphasized revolutionaries, pro-independence, ex-presidents, politicians, artists and intellectuals.

In the popular sentiment, a dilapidated or displaced account is usually devalued, and immediately the paper currency and the character fall from the people's favor, while the new account is valued more, because it gets a greater value and the character who identifies it, is also viewed with greater appreciation.

In the current ticket 500 pesos, in circulation since August 30, 2010, appear on the front of the self portrait of the Mexican muralist Diego Rivera, who expelled the hero of the battle of Puebla, Ignacio Zaragoza, who had been in force since 1994 when 500 was called new weights It should be noted that the hero of the Battle of Puebla had been in notes and coins of different denominations years ago.

Throughout history have appeared in the 500 pesos accounts Francisco I. Madero and José María Morelos, just to name a few.

But there are many other 500 pesos notes printed by private banks and regional banks.

the American Bank Note Company issued the so-called AA-type ticket, 500 pesos, between 1936 and 1978, with the bust of José María Morelos on the front and the Mining palace of Mexico city. The ticket was black and green.

From 1969, the banknote factory Banco de México printed the denomination of 500 pesos, which was green, in which Francisco I. Madero appeared on the front and behind the Piedra del Sol and reliefs from the Piedra de Tizoc.

In 1993, due to such high inflation, the Bank of Mexico decided to change currency, eliminating three zeros on the banknotes, leaving room for the new Peso.

The invoices also evolved as technology progressed and the need to add elements of security, sustainability, but also practicality, for example to identify them more easily for the blind population, have sensitive elements to touch.

Also the tickets, depending on the denominationthey have the perfect register, the watermark, the microprinting wire, the security wire and the transparent window. In denominations of 100, 200, 500 and 1000 pesos the 3D wire can be identified, in addition to many other security elements.

As of 30 September 2002, 20 pesorekeningen were printed in polymer instead of paper put into circulation.

The polymer, which is a more durable material, was incorporated in these low denominations because it is the materials that deteriorate more quickly.

SPECULATION BY THE NEW TICKET

The issue of currency in Mexico is the responsibility of the coin, which depends on the Ministry of Finance. And every new coin that is put into circulation must be presented to Congress for approval.

It is not the same with the tickets.

The board of directors of Banco de México has the constitutional authority to decide on the type of paper currency or plastic, the design and the name of the invoices that it puts into circulation.

Perhaps because in the previous 500 peso bill there was a big dispute with legislators for the relief of the hero Zaragoza, for what they regarded as an unfortunate picture of Diego Rivera and Frida Kahlo, this time Banxico maintains a big secret about who the character will appear on the new ticket.

During the history of Mexico, there have been countless impressions of 500 pesoric drawings.

The surprise of this finding was given by ours Department of the Treasury of the United States, when he returned to the country in 2015, a collection of 60,000 accounts issued by 28 private banks that worked in Mexico at the end of the 19th century and the beginning of the 20th century and which remained in the possession of the United States for decades , after the invasion of North America Port of Veracruz.

In this collection there are 500 banknotes from the Bank of Jalisco, from Tamaulipas, from the state of Mexico, Morelos, Nuevo Leon, Mercantil de Monterrey and Occidental de México. They are issues of banks that have been established and that have received a federal concession to issue paper money between 1864 and 1903; the most recent of which dates from 1914.