morocco December 4, 2020 morocco Comments Off on A delegation from the EA Committee to the House of Representatives visits the accredited consulates in Dakhla 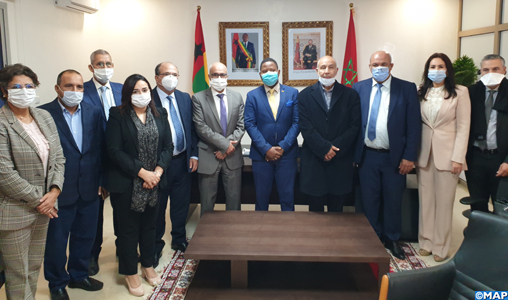 Dakhla – A delegation from the Committee on Foreign Affairs, National Defense, Islamic Affairs and Moroccans living abroad in the House of Representatives visited several consulates accredited in Dakhla on Friday.

This visit is part of strengthening parliamentary diplomacy and cooperative relations with brother and friendly countries that have opened consular offices in Dakhla, the capital of the Dakhla-Oued Eddahab region.

In a press statement, the chairman of the parliamentary committee, Youssef Gharbi, emphasized the significance of this visit, which proved that the fraternal African countries have a very strong connection with Morocco, expressing his wish to see the opening of these consulates stimulate a new dynamic in the economic ties between the Kingdom and Africa.

In this sense, Mr Gharbi emphasized that the opening of these consulates in the southern provinces shows the African brother countries’ great sympathy for the national cause and their support for Morocco in its just goals.

This tour, started from Laâyoune, will be crowned with a visit to the El Guerguarat border post, following the FAR operation to dislodge the ‘Polisario’ militias, he said, noting that this area is now open to the movement of people and goods between Morocco and Mauritania.

Fatiha Sedasse, member of the Committee on Foreign Affairs, National Defense, Islamic Affairs and Moroccans living abroad in the House of Representatives, stressed that this visit emphasized the strong support of the legislative institution for the dynamism of Moroccan diplomacy, noted that the presence of consulates general of a number of friendly countries in the southern provinces of the Kingdom is an important message to the international community and a strong recognition of the Moroccan Sahara.

The visit of the Commission with its various political formations to the El Guerguarat border post is convincing evidence for the international community and testimony to the normal flow of traffic through this passage, she continued.

In a similar statement, Member of the Commission of the Haraki Group in the House of Representatives, Lahcen Skouri, indicated that the opening of diplomatic missions in the southern provinces of the Kingdom is a reflection of the excellent relations between Morocco and several countries . friendly and fraternal countries, emphasizing the support these countries give to Morocco.

This initiative, in addition to the political component, will have the mission of consolidating promising economic and trade relations and exchanges so that Dakhla can position itself as a strategic hub between Morocco and its African depth, he added. .

The Consul General of the Republic of Guinea-Bissau, Armandinho Erickson Fernandes Teixeira, for his part, underlined in a statement to the MAP that this visit is part of initiatives aimed at increasing the partnership between the two friendly countries.

The opening of a diplomatic representation of his country in Dakhla will give new impetus to the partnership and cooperation relations between Morocco and Guinea-Bissau, in the sense that it will strengthen the exchange of ideas and points of discussion. opinion on the means likely to develop bilateral relations, he noted.

As for the Deputy Consul General of the Republic of Guinea, Cherif Mohamed Lamine, he expressed his pride in this distinguished visit that reflects the quality and solidity of the relations that unite the two countries at all levels.

The members of the delegation went to the El Guerguarat border post after visiting the recognized consulates in Dakhla and Laâyoune.