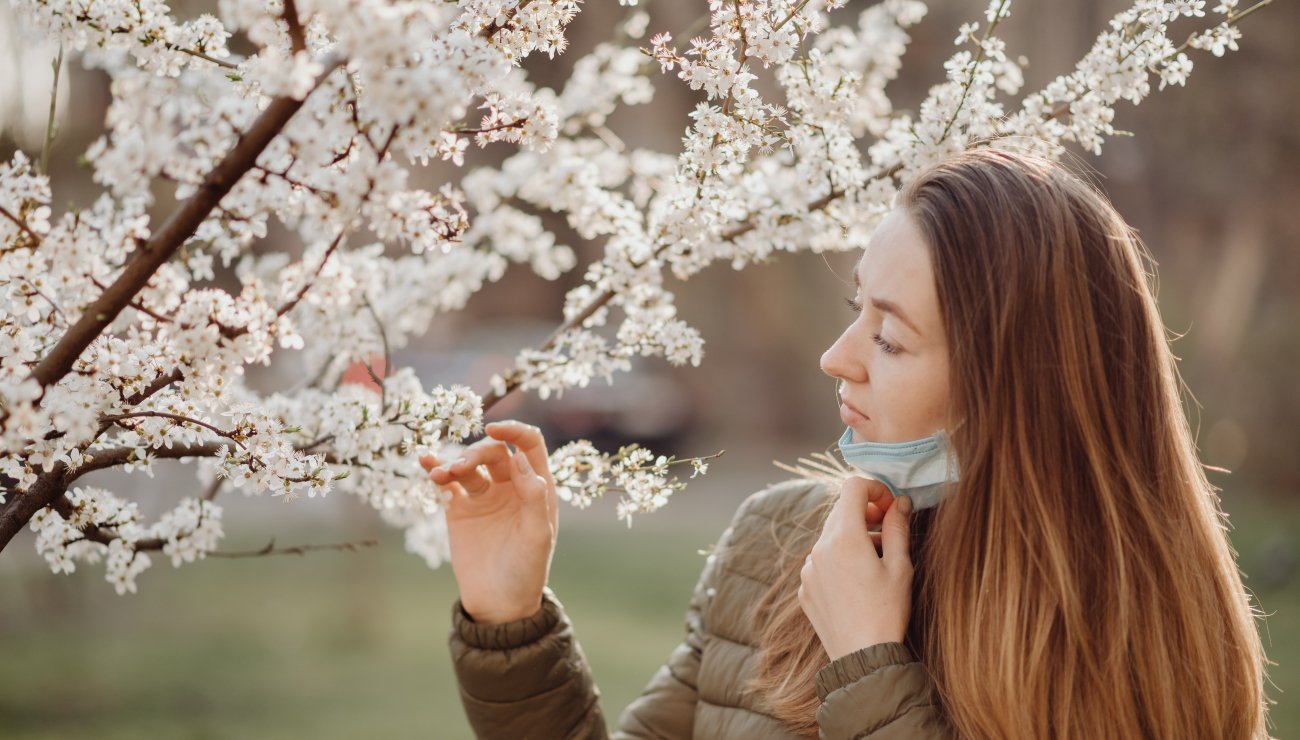 One Saturday morning in early April, while he was brewing fresh mint leaves, Eian Kantor found himself losing his sense of smell: strangely enough, his herbal tea didn’t smell at all. . He began to rummage in the fridge and smell a jar of pickles, hot sauce, garlic: no odor.

Since incarceration began in New York State in late March, 30-year-old Eian Kantor has remained incarcerated with his partner in his Queens, New York apartment. He therefore did not suspect he had Covid-19, despite a mild fever attributed to seasonal allergies. When he was finally able to get tested, several weeks after losing his sense of smell – or anosmia – the test came back negative. But months later, several more tests showed that he had high levels of antibodies to the new coronavirus, confirming he was infected.

It is estimated that about 80% of people with Covid-19 have odor disturbances, and many of them also suffer from dysgeusia or ageusia (a disturbance or loss of taste, respectively) or changes in the ability to detect irritants such as chili. Loss of smell is so common in people infected with the coronavirus that some researchers have recommended using it as a diagnostic test, as it can be a more reliable marker than fever or other symptoms.

Also read:
Covid-19: Symptoms from the head to the toes

But a mystery remains: How does SARS-CoV-2 (the virus responsible for Covid-19) rob its victims of their smell and taste? At the very beginning of the pandemic, doctors feared that anosmia could be a signal that the virus would make its way to the brain, where it could have caused serious and permanent damage. through the olfactory neurons present in the nose. But studies have shown that probably isn’t the case, says Sandeep Datta, a neuroscientist at Harvard University School of Medicine. “An extensive reading of the data available to date suggests that the main damage is in fact localized in the nose, in the nasal epithelium,” the layer of cells responsible for the absorption of odors. “It appears that the virus primarily attacks cells and stem cells and not directly neurons,” explains Sandeep Datta. But that doesn’t mean neurons can’t be affected, he says.

Olfactory neurons do not have ACE2 (Angiotensin Converting Enzyme) receptors on their surface, allowing SARS-CoV-2 to enter cells. But the so-called “sustentacular” cells, which support and protect olfactory neurons, are riddled with ACE2 receptors. These cells, in the mucus that line the olfactory epithelium, maintain the delicate ionic balance required for olfactory neurons to generate signals for the brain. If this balance is disrupted, it can lead to a loss of neural signaling – and therefore of smell. The sustentacular cells also provide metabolic and mechanical support to the cilia at the end of the olfactory neurons, on which the receptors that detect odors are concentrated. “If something physically disturbs those lashes, it affects the sense of smell,” says Sandeep Datta.

In a study published in early July Brain, Behavior and ImmunityNicolas Meunier, from the University of Paris-Saclay, infected hamsters’ noses with SARS-CoV-2. Two days later, about half of the rodent tissue cells were infected. But the olfactory neurons were spared even after two weeks. And, surprisingly, the olfactory epithelium in hamsters had completely dislodged, as was the peeling of the skin after a sunburn, according to Nicolas Meunier. Although the olfactory neurons weren’t infected, their eyelashes had completely disappeared. “However, if you remove the eyelashes, you remove the olfactory receptors and thus the ability to detect odors,” explains Nicolas Meunier.

The breakdown of the olfactory epithelium could explain the loss of odor. But it is not yet clear whether the damage is caused by the virus itself or by an invasion of immune cells, as Nicolas Meunier noted after infection. One thing is certain: we do not report that many cases of anosmia in other viral diseases. “We think this is a very specific symptom of SARS-CoV-2,” says Nicolas Meunier. In previous work on other respiratory viruses in his lab, he found that sustentacular cells were only rarely infected, whereas in the case of SARS-CoV-2, about half of those cells are the pathogen. In other viral infections, the sense of smell is often disturbed by a blockage in the nose, but Covid-19 usually does not cause nasal congestion.

Also read:
Covid-19: Why Do Children Retain Their Sense of Smell?

For example, researchers have found compelling explanations for the loss of odor. However, the origin of the loss of taste remains uncertain. Admittedly, one may have the impression of losing the taste when one becomes anosmic, so much so are the smells a key component of the flavors (the sum total of the sensations perceived during the tasting of food). But many people with Covid-19 develop true ageusia and cannot even detect the sweet or salty taste. Taste receptor cells, which detect compounds in saliva and send signals to the brain, do not have an ACE2 receptor and are therefore unlikely to be contaminated with SARS-CoV-2. But other supporting cells in the tongue carry this receptor, which may indicate the disappearance of the taste.

The loss of “thermal” perception – the burning of hot peppers or the refreshing feeling of mint – also remains unexplained and largely unexplored. These sensations are not flavors. Rather, their detection is conveyed by pain-sensitive nerves – some of which have ACE2 receptors – found throughout the body, including the mouth.

Other clues about how the coronavirus makes odors disappear comes from people recovering from anosmia. “Most patients lose the odor suddenly and recover quickly, but a few have a much more persistent anosmia and regain odor over a much longer period of time,” says Sandeep Datta. The olfactory epithelium regenerates regularly, “a protection against the constant aggression of environmental toxins”, specifies Nicolas Meunier.

Eian Kantor belongs to the second group of patients: more than seven months after his loss of smell, he still smells nothing. ‘It’s hard to live with. You only realize how important scent is when it disappears. If there was a fire in my house I wouldn’t even feel it. It’s very worrying, ”the young man explains. And then anosmia diminishes the pleasure of eating to nothing. “Foods I once loved now taste bland and disgusting,” he adds.

According to Carol Yan, a rhinologist at the University of California at San Diego, anosmia is a real health risk. ‘It increases the mortality rate. If you can’t smell and taste the food, it exposes you to dangers, such as poisoning. Anosmia can also lead to social disabilities or nutritional deficiencies. “

Also read:
Loss of smell, a difficult condition to live with

This variation on the sensory theme extends to another symptom called “parosmia,” a sign of possible recovery in people with long-term anosmia. Freya Sawbridge, a 27-year-old New Zealander, signed Covid-19 in March. After several weeks of anosmia and ageusia, in which everything tasted like “ice cubes and cardboard”, the young woman began to discover the most basic flavors – sweet, salty, sour – but no nuance of aromas. who come out to eat. “The chocolate tasted like sweet rubber,” she says.

Then after about five months, some scents came back, but not as expected. All food smelled of an artificial strawberry flavor for a while. But these days, “everything smells bad and is distorted,” says Freya Sawbridge. No scent is consistent, and all are unpleasant. The smell of onions is unbearable for him and there is a strange “chemical taste” everywhere. “Everything I eat seems to have been sprayed with a window cleaner,” she adds.

Parosmia can occur when stem cells that develop into new olfactory neurons try to project their long fibers called “axons” through tiny holes at the base of the skull to connect to a structure in the brain called the sphere. . olfactory ”. Sometimes the axons connect in the wrong place and cause the wrong smell, but over time, the wrong wiring can potentially correct itself.

On the same subject

This is welcome news for patients like Freya Sawbridge. But, like others, she wants to know how long her anosmia will last. “We can’t predict the exact recovery time for people with anosmia,” Carol Yan replies, but it’s usually six months to a year. “With persistent loss of smell due to flu, there is a 30-50% chance of spontaneous recovery after six months,” she adds. There have been cases of recovery after two years. But we believe that further the ability to regenerate can be hindered. And the chances of recovery are unfortunately quite small. “

Eian Kantor has tried every possible means to regain his sense of smell: a course of high-dose steroids to reduce inflammation, an olfactory training program with essential oils, beta-carotene supplements for nerve regeneration and acupuncture. Nothing made a difference. Carol Yan recommends sinus irrigation with budesonide, a topical steroid that a Stanford University study showed improved results in people who lost their sense of smell more than six months after the flu. Another promising treatment that Carol Yan and other researchers are studying is platelet-rich plasma, a fluid with anti-inflammatory properties obtained from blood that has been used to treat certain types of nerve damage. But regardless of the treatment, “the results are not spectacular,” says Carol Yan. It’s not like you wake up and say to yourself, “I can smell again!” But if you can smell soap again or appreciate the taste of certain foods, that’s a big step forward. “

There is one last worrying aspect of anosmia: it has been identified as a risk factor for certain neurodegenerative diseases. “After the so-called ‘Spanish’ flu pandemic of 1919, the prevalence of Parkinson’s disease increased, explains Nicolas Meunier. It would be really concerning if something similar happened to Covid-19. “

But Carol Yan thinks this fear is exaggerated. “There is certainly a link between classical anosmia and neurodegenerative diseases, but we believe that anosmia caused by viral infection works by a completely different mechanism,” she says. These viral anosmias probably do not increase the risk of neurodegenerative diseases. This should reassure Freya Sawbridge and Eian Kantor, as well as the millions of other people around the world who have been affected by the loss of fragrance associated with Covid-19.