Eid Al-Adha: abundant supply and enhanced control for this year 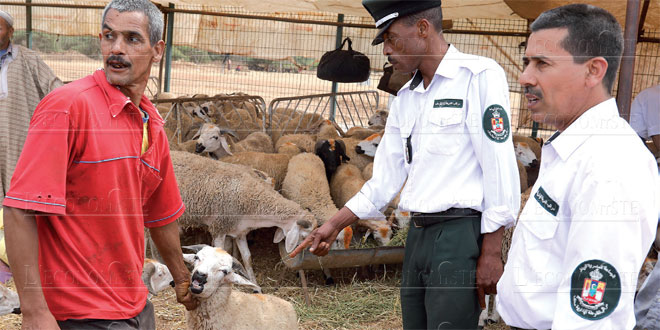 Young lamb, one year old sheep or big ram. There was a big choice on Thursday August 16 at the open markets in Casablanca. And for all wallets while the offer was not yet at cruising speed. The large influx of animals and buyers was expected the weekend after.

Elsewhere in the Casablanca-Settat region (Berrechid, El Jadida, Sidi Bennour and Mohammedia) the sheep rates were cheaper compared to the economic capital. But overheating was evident in the traders who occupied garages and other warehouses in residential areas. Initially these commercial sites were not authorized, but the interior had to cancel its decision without a clear reason.

In any case, the Ministry of Agriculture counts on a sufficient and healthy supply. This is evident from the "evaluation developed in close consultation and collaboration with professionals in the red meat sector".

Herds have been the subject of vaccination campaigns and health monitoring by the ONSSA veterinary services and veterinarians in charge of infectious animal diseases with economic consequences. As a result, "the health status of the entire national herd, especially that of sheep and goats, is very satisfactory in all regions of the Kingdom," assures custody.

In particular, sheep and goat farming benefited from the good conditions in the harvest year 2017-2018. Starting with the abundance of food and grain. This has resulted in a significant impact on the prices of locally produced cattle feed. These prices decreased by 14% compared to the previous campaign. Zootechnical performances were also noted by professionals and departments of the Ministry of Agriculture: a lamb rate of 93% and a mortality limited to 2%.

On the supply side, the estimate is based on updated statistical data from the Ministry of Agriculture: sheep and goats. It also takes into account slaughtering recorded at the level of controlled slaughterhouses and the births and deaths of the year. In short, a survey that was supervised this year and for the first time a colossal operation of identification and traceability. (See edition of 6 August 2018).

In total, the supply for Eid Al-Adha is estimated at 8.1 million units. This is practically the number of rings that cattle must carry. Of this figure there are 4.6 million male sheep, 1.38 million ewes and 2.1 million goats.

Also note the use of the "special Eid Al-Adha" action plan since the beginning of June. This plan is pursued by other measures. This concerns in particular the installation of temporary souks in certain cities to strengthen and restrict sales structures (urban environment), only for properly identified animals belonging to registered farms.

This without letting go of control at all levels, before, during and after the day of sacrifice. For this purpose a line will be commissioned by Onssa: 08 01 00 36 37.

ALTHOUGH the operation of identifying sheep has to guarantee quality animals, there is no risk, acknowledges the Office for Sanitary Safety. Hence the advice that must be adhered to.
– When buying sheep, in addition to the religious requirements, care should be taken to ensure that the animal does not show signs of diseases such as cough, diarrhea or an abnormal increase in the volume of the abdomen.
– Provide for feeding and feeding the animal with straw and clean water, while not feeding 12 hours before slaughtering. Only water can be given to the animal.
– Before slaughter, prepare the place and tools that must meet the necessary hygiene requirements, including the cleanliness and abundance of water.
– The person who bleeds must have a clean body and impeccable clothing.
– It is necessary to start skinning the animal with all precautions so that the meat is not contaminated by the skin and the blowing of the animal through the mouth is avoided.
– Before removing the intestines from the oven, wash the knife and hands, as the procedure is a very sensitive step on the hygienic level.
– You must pull and cut the intestines, avoid contaminating the meat and place in a separate and clean container before emptying and washing.
– If you notice a change in the color of the meat (dark red or yellowish), you must take part in the veterinary services that provide permanence on the day of Eid.
– If we observe one or two cysts in an organ, we can remove them by taking the precautionary measures to not pierce them and consume the rest of the organ. However, if there is a large infection (multiple cysts extended), eliminate the entire organ.
– In case of an attack by the "taenia larva", a parasitic disease, which takes the form of white spots in the liver or cysts of water on the inside of the liver or on mesenteric fat, it is recommended to use whiteheads or remove cysts and consume the rest of the organ if the condition is mild, otherwise destroy the whole organ in the event of a major infection.
– Moisten the carcass by storing it away from the contamination in a cool place for 24 hours after slaughter.
– Cut the meat and store it under cooling, the recommended temperature should not exceed 3 degrees.
– Sprinkle the skin with plenty of salt and store in a cool place until used.
– Destroy and bury organs that are unsuitable for consumption, clean the place of slaughter and use the aids that detergents use and collect all the waste in sealed bags.