Emotion in Morocco after the ordeal of Khadija, a teenager kidnapped, raped and tortured 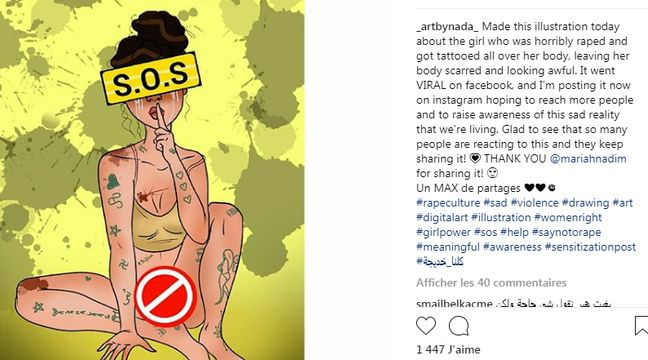 The testimony of a Moroccan teenager, Khadija, who said she was kidnapped, raped and murdered by a group of men, led to a massive mobilization on social networks and a petition to help her was launched. The hashtag #noussommestouskhadija accompanied by a naked female drawing (made by
_artbynada_, a young Moroccan artist), tattooed, the face of an "SOS" became viral after the publication of her testimony in the Moroccan media.

On the video released on August 21, Khadija Okkarou, 17, said she was kidnapped three months ago from her aunt's house in Fqih ben Saleh in central Morocco by boys who were known to belong to a "dangerous band". "They have kidnapped, raped and tortured me for almost two months, (…) I will never forgive them, they have destroyed me," she said, showing serious tattoos and traces of burning cigarettes on her. body.

According to his father, Mohamed Okkarou, three of his attackers, about whom no information has filtered, are arrested Saturday. He also claims that the first trial session will take place on 6 September.

A total of 12 people were arrested, said Naima Ouahli, member of the Moroccan Society for Human Rights in Beni Mellal, with Fqih ben Saleh. Moroccan police and prosecutors could not immediately be reached to comment on the young woman's case.

"Her condition is stable, we try to support her, to assure her that her right is being done and to tell her that she has nothing to do with it … We are moved by the momentum of solidarity with her, "said his father.

The girl's testimony shocked and displaced many netizens, who expressed their indignation at this case and claimed "#justicepourKhadija".

When I see a tweet #justicepourKhadija to succeed, I have a heartbreak … the pain that this poor girl must feel must be unimaginable …. I need a lot to scare but this story is really unbearable. 😢😢😢

A petition, intended to provide him with care and psychological help, had collected more than 3,400 signatures on Sunday evening. Many internet users have shown their support for the young victim, in the hope of an awakening of consciousness in the kingdom.

In Morocco, a girl was seized, raped and mistreated by more than ten men for two months. She was drugged and tattooed all over her body by her executioners. There is a petition to the attention of the king of Morocco … SIGN. #JusticePourKhadija https://t.co/7KDkPaffCg

May the terrible shock of this gang rape awaken the conscience #Moroccoas was the case of Jyoti Sing, "the daughter of India", on a bus to New Delhi or the #Manada (the package) on a young girl from Madrid in Pamplona. #justicepourKhadija pic.twitter.com/UKGNwQLI4B

I would like her Majesty to take over the defense of Khadija and, ideally, her psychological follow-up, her medical guidance and her studies. She was the victim of this country's failure to respect her youth and deserves an opportunity to rebuild #justicepourkhadija

An online prize pool was also opened for the family of the girl.

🚨 Boys, have just sent me this link: https://t.co/dRbxfNM2yY (CAGNOTTE RELIABLE, THE TOTALITY IS PAID TO THE FAMILY) If you can not make a donation (even very small, do not hesitate) to the link share 🙏🏻) #JusticePourKhadija

Precedents in the kingdom

The affair is all the more sensible in the kingdom because it reflects previous facts that have changed the mind. At the end of 2015, a 16-year-old girl set herself on fire after being raped, her assailants blackmailed her by threatening to broadcast videos of her rape. The defendants were provisionally released prior to their trial, causing a scandal. Eight people were sentenced to eight to twenty years in prison.

One of the most famous cases of the female cause is that of Amina Filali, a 16-year-old girl who also committed suicide in 2012 after being forced to marry her rapist. Civil mobilization after his death led to the repeal of Article 475 of the Criminal Code, which allowed rapists to escape from prison
by marrying their victim.

The number of rape cases handled by the Moroccan courts doubled in 2017, from 800 on average to 1,600. This crime is doubly painful for the victims, often regarded as the first culprits of a company with traditional values.

Khadija is just the tip of the iceberg. She is one of the few women who have had the courage to reject their attackers against the authorities. My heart is with them and with all those who continue to suffer in the shadows, fear and silence. #JusticePourKadija