Khadija's ordeal told by his father 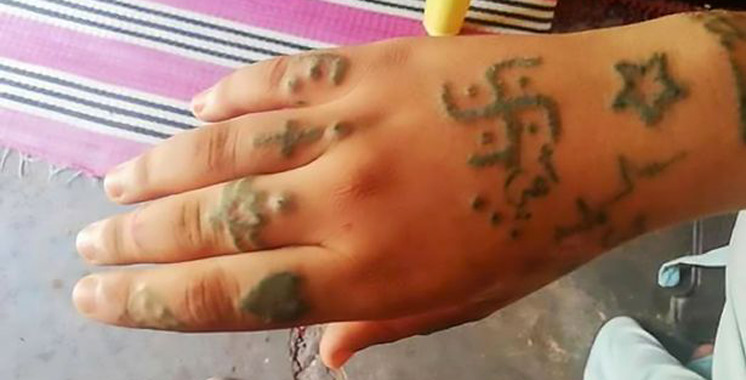 It is a terrible story that Khadija lived in the province of Fkih Ben Saleh near the municipality of Oulad Ayad. At the age of 17 the girl was brutally raped, kidnapped and … signed for life.

The teenager was kidnapped and taken to an olive grove. The culprits … more than a dozen young men, according to Mohamed, the victim's father. "My daughter was forcibly taken, drugged, raped and tortured by these men for two long months, and she suffered the worst abuse: cigarette burns, gang rapes or deep tattoos on all of its members. No part of his body was spared by these criminals ", Mohamed trusts. Khadija was kidnapped by two people on a motorcycle. "One of them threatened her with a knife while her henchman drove the vehicle, she's gone until the end of Ramadan until last Wednesday, and when she returned, my daughter brought her own complaint to the police with her mother," he says. "At the moment Khadija's psychological state is stable, we try to reassure her so that she can hope for her future, I ask all those who are sensitive to his cause to help us morally and financially through this very difficult phase. . I would also like to express my gratitude to the many people who have shown their solidarity and support to my daughter in this ordeal. " The teenager has left school since 2013 when she was 1st year college. "After what has happened to her, she is convinced that studies are her last resort, she wants to become a journalist to tell people the truth, it is his dream, his father continues.

Hicham Kinani, vice president of the Orphan Association of Orphaned and Abandoned-Fkih Ben Saleh, stated in his turn that "Two complaints were filed with the local authorities, the first by the victim's father to report the disappearance of his daughter and the second by Khadija herself on her return, the latter concerning kidnapping with abduction and violence". In this connection he points out that only nine days after this complaint nine people were arrested and that on Sunday three other people were arrested by the police. "Most young men arrested by the police are people without goals in life or at work," says the vice president of the family association of orphans and abandoned – Fkih Ben Saleh. "The most shocking in this case is the extreme violence that has been done to the girl.You should know that this girl, besides being raped, is tattooed in her private parts", He continues.

As far as the care of the victim is concerned, Hicham Kinani indicates that it relates to three aspects, namely: psychological support, legal aid and the social situation of the victim's family. "At the judicial level we plead for an exemplary conviction and severe punishment for all those involved in the rape and kidnapping of Khadija." At the social level it should be noted that this family lives in extreme poverty and has no income that allows them to survive their needs. As far as the medical side is concerned, the association also contacted a dermatologist to make a diagnosis of the health status of the girl. The next step is to find out whether the tattoos can be removed because, as you can see, the markings are quite deep.

In his capacity as vice-president of the association, the family of orphans and abandoned Fkih Ben Saleh-Hicham Kinani does not call upon Khadija as a mere news item. For him, "We need to make young people aware of the seriousness of these acts, it is the whole of our society that is beginning to suffer from this kind of thing."