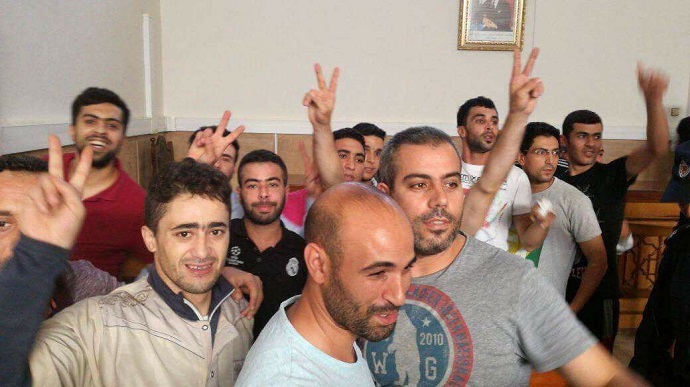 On the occasion of Eid Al Adha, King Mohammed VI pardoned 188 detainees from Hirak du Rif. 11 of them are imprisoned in Casablanca, while the others are divided between the prisons of Nador, AlHoceima and Taza.

Of the 889 prisoners who have been forgiven today by King Mohammed VI on the occasion of Eid Al Adha, 188 are detainees of Hirak Rif. 11 pardoned prisoners served 2 to 3 years in prison in Casablanca after their condemnation at the end of June at the end of the lawsuit against the leaders of the social protest movement that hit the Rif region (north) in 2016-2017.It is Mohamed El Mehdali , Mohamed Naimi, Ahmed Ahmed, Hezzat Ahmed, Fahim Ghettass, Mohamed Mekouh, Jaouad Belaali, Mohamed El Hani, Badr Akraf, Aziz Khali and Khalid El Baraka.

The other pardon concerns persons convicted in connection with the Hirak of Rif, with pronouncements pronounced by the courts of Nador (north) and Al Hoceima (north), according to their lawyers on the spot and who were kind enough to send us lists they have (see slide show).

USFP Member of Parliament Hanane Rihab reports a release of 184 detainees in a message posted on her Facebook account. This is an excerpt from a statement she gave to the state secretary of human rights, Mustapha Ramid. It reads: "The king granted his royal grace to 184 Hirak prisoners, of whom 173 were tried by the Court of Al Hoceima.

The king of Morocco, Mohammed VI, licensed a total of 188 people who had links with the Hirak protest movement condemned at the end of June, a pardon granted on the occasion of the religious holiday of Eid al-Adha, according to sources at the National Council. of Human Rights (CNDH), "the AFP agency reports in a message.

The leaders of the Nasser Zefzafi movement, Rabie El Ablaq, Nabil Ahemjiq and Mohammed Jelloul, sentenced to 20 years in prison for "undermining the security of the state" are not part of the acclamation, and all defendants in the Casablanca trial appeal and the hearing on appeal is scheduled for October.