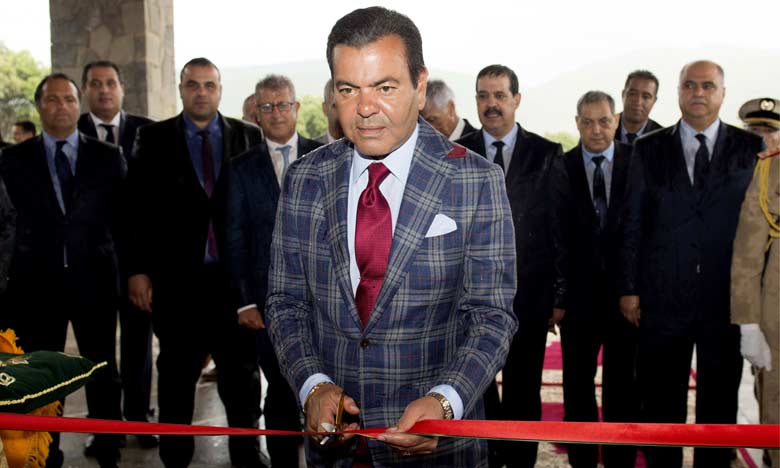 His Royal Highness Prince Moulay Rachid continued on Monday in Ifrane with the inauguration of the "Michlifen Golf and Country Club", built on a total area of ​​100 ha.

Upon his arrival at the "Michlifen Golf and Country Club", HRH Prince Moulay Rachid looked at some of the Auxiliary Forces that were honored before being greeted by the Minister of Youth and Sport, Rachid Talbi Alami, the Secretary of State for Rural Development and Water and forests, president of the province of Ifrane, Hammou Ouhelli and the wali of the Fez-Meknes region, governor of the prefecture of Fez, Essaid Zniber.

His Royal Highness was also greeted by the president of the Regional Council, the governor of the province of Ifrane, the commander of the El Hajeb arms factory, the president of the Ben Smem Commune, the vice president and members of the Royal Moroccan Golf Federation. , the Director General and the executives of the National Office of Railways.

After cutting the dedication ribbon, His Royal Highness Prince Moulay Rachid visited the clubhouse of the "Michlifen Golf and Country Club". This clubhouse includes a Proshop, a library and a restaurant.

Then HRH Prince Moulay Rachid visited the other parts of the club, including the golf academy (placing, adjusting and coaching of studio's), the practice area, the putting green and the characteristic hole at the beginning. # 9.

The Michlifen Golf & Country Club is situated at 1,650 meters above sea level, between mountains and forests of cedars and holm oaks, in unspoiled nature in the heart of the Middle Atlas, a region known for its charming alpine architecture.

The 18-hole course was designed by international champion Jack Nicklaus, who started prestigious golf courses all over the world. A first in North Africa.