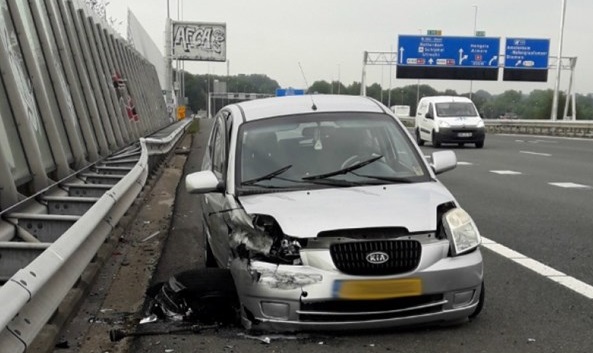 AMSTELVEEN – The Amstelveen motorist B. (49) is urgently looking for road users who have recorded with their dashcam how they were hit by an inserting SUV at the Watergraafsmeer junction. Because of that tick she landed in the crash barrier, but the driver of the BMW drove on, reports our media partner NH.

The woman drove around the A10-East towards the Zeeburger Tunnel on Saturday morning around quarter to nine in her Kia Picanto. ,, I drove there with a 110-speed drive, when that car wanted to insert on the A10. That car wanted to go to the left, but he did not see me. Because there was also traffic next to me, I was actually stuck. I started swinging incredibly and I crashed into the guardrail with a blood trap, "she says.

The Amstelveense is slightly injured and her car is total-loss. But as opposed to AT5, she says that she is particularly annoyed by the 'shit-mentality' of the BMW driver.

Although three witnesses have now shared their story with the police, B. hopes that there are drivers who accidentally filmed the crash with their dashcam. ,, There was a lot of traffic, "she expresses her hope that there is someone who can help her in the detection of the suspect.