Less ghost cyclists on Erasmus Bridge thanks to boo-calling campaign 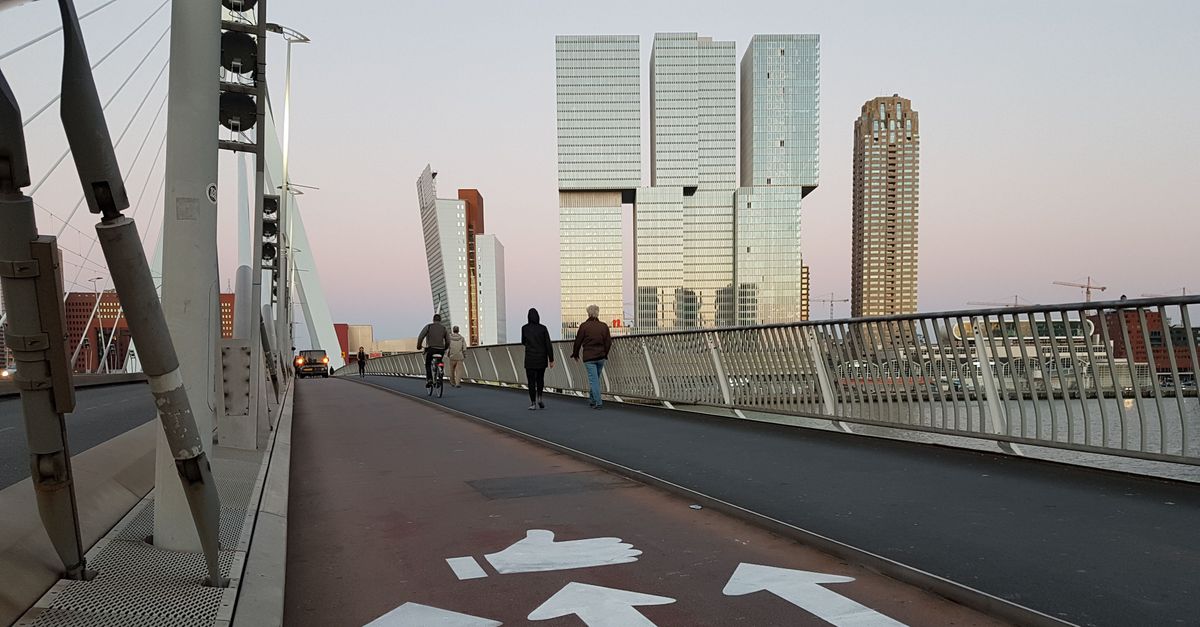 Thanks to a playful campaign with ghosts painted on the bicycle path, fewer people on the wrong side are cycling into the Erasmus Bridge in Rotterdam. Since the action started in June, the number of so-called ghost cyclists fell by 11 percent, the municipality of Rotterdam reports Tuesday.

Normally, about 420 cyclists take the bridge against the driving direction every day. According to the municipality, ghost cyclists are a major source of irritation for other cycle path users. Whether or not they have caused accidents, a spokesperson for the municipality does not know. "But the high speed in the descent of the bridge makes it dangerous."

That is why two months ago Rotterdam launched an initiative to do something about the problem under the heading 'Call against ghost cyclists'. The slogan appeared on the bike path, accompanied by a cartoon ghost on a bicycle. Further on, large white arrows indicated the direction of travel. Ghost cyclists were confronted with a special traffic light and a thumbs down on the road surface.

Regional broadcaster TV Rijnmond made a video about the ghost cyclists in June:

The number of ghost cyclists has now decreased by almost fifty per day. Behavioral psychologist Ruud van Breda, one of the creators of the campaign, concluded that after counting a total of 500,000 cyclists, before and after the start of the action. "At the same time, at Willemsbrug, where we also counted, we saw an increase of 9 percent," says Van Breda, who can not explain that effect exactly.

'Calling a boo is just a joke'

The decline on the Erasmus Bridge is not because Rotterdammers have shouted "Boe!" Massively against ghost cyclists, says Van Breda. "That was just a campaign name, a joke." It was mainly about clarifying the social norm that is not good against the direction of driving. "Many ghost cyclists think it's okay, because they see others do it too. It helps if such a standard suddenly becomes visible, also thanks to attention in the media. "

The arrows on the road surface have helped, according to Van Breda. "If you ride, you drive a bit on the autopilot. You are looking for the most obstacle-free, easy route. If you suddenly cycle against the arrows, it does not feel unconscious because it is clear that you are not doing something right. "

The ghost bike campaign is part of a broader offensive of the municipality of Rotterdam against dangerous bicycle behavior. At a busy intersection, for example, signs were placed that warn of the dangers of cycling by red light. After placement of the signs, the number of red cyclists fell by almost 50 percent. Later this year, campaigns against smartphone use will follow on bicycles and bicycles without light.