The most important news today

By reaching 25 degrees in De Bilt, just before 15.00, Tuesday has become the 52nd rural summer day of the year. This has broken the old record of 2006. The chances are that there will be an end to the beautiful weather this weekend. The predictions show that the temperature does not exceed 19 degrees.

Due to a malfunction in an operating system, there are no trains to and from Amsterdam on Saturday evening. Also to and from stations in the area, such as Schiphol, no train traffic can drive. Amsterdam Zuid station was closed because the platforms became too crowded. According to the consequences of the disturbance the rest of the day to notice.

The police have arrested a man (25) who is suspected of hacking accounts from web shops, digital blackmail and large-scale phishing campaigns. He would also have digitally blackmailed a woman by threatening to put her sexually tinted private photos online. He has announced his actions.

Rihanna asks the Netherlands for donation, Minister Sigrid Kaag wants to talk to her

The singer asked the Dutch government via Twitter for 100 million dollars for education for children in developing countries. Kaag responded with a 'I hope to see you in New York next month'. According to a spokesperson for Kaag, the informal meeting must take place when Kaag is in New York before the General Assembly of the United Nations.

On board are 177 rescued migrants who are only allowed to disembark when other EU member states are willing to receive them. Minister Matteo Salvini (Home Affairs) says he wants to return the migrants to Libya if they are not spread across the EU. The new government coalition of Italy has a strict policy on migrants. The rescue ship Aquarius was not allowed to moor in the port of the country for days at the beginning of June.

This will be the news of 22 August

The 29-year-old Tilburger Berry of D., according to the Public Prosecution Service (OM), had a motive because he was fired by the bus company. The court in Breda turns over whether there is sufficient evidence for the arson in several buses.

After Sturm Graz and Standard Liege were eliminated, Ajax only has to beat Dinamo Kiev to get a ticket for the main tournament of the Champions League. The team from Amsterdam will play at home against the Ukrainian club on Wednesday evening at 21.00 and the return in Kiev will be next Tuesday. The last time that Ajax came through the qualification of the millions ball was already eight years ago and at that time Kiev was also opponent in the last round.

The satellite has been developed to measure wind on earth in new ways. The launch has been postponed earlier due to strong winds at the base in the city of Kourou in French Guiana. The mission takes at least three years, but may be extended to five years.

Glennis Grace can take an important step in her mission as a singer in the United States during the live show of America's Got Talent. A place in the semi-finals is at stake. In these quarter-finals Grace does not only compete with other singers, she also fights against a cat act, an acrobat duo and a stand-up comedian.

The weather in the Netherlands

There is regular sunshine with temperatures of over 23 degrees close to the sea to locally 28 degrees in the east and southeast. Thursday showers and cooler air come closer. How late the showers start to go, is still uncertain.

The weather on holiday

In many places in the south of Europe there is plenty of sun, at temperatures that are almost anywhere between 30 and 35 degrees. Especially in the interior of Portugal and Spain it is very hot with 36 to 39 degrees.

In the south-east of France and also in Spain, thunderstorms can occur locally in the afternoon or evening. Also in Italy there are scattered showers, these can be heavy showers with thunderstorms, hail and gusts of wind. Especially in Sicily, a lot of rain can fall in a short time, which could cause local nuisance. Towards the Balkans and Greece it stays dry more often, although here too a local thunderstorm can fall. In Turkey it stays dry in lots of sun.

The next few days little will change, but in the north of France (and also in the Benelux) it will be a lot less warm after the failure. 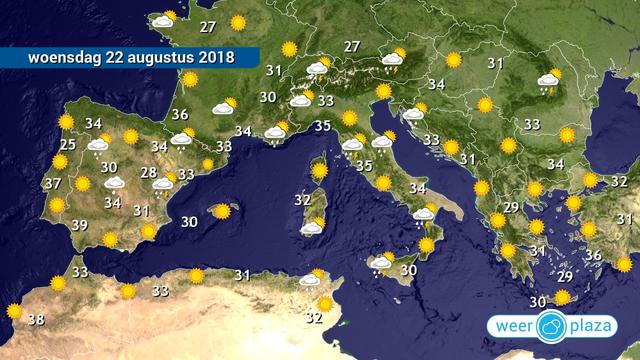 View the prospects for other countries here.