Alison Mau: New Zealand has to close its prisons – or blow them up 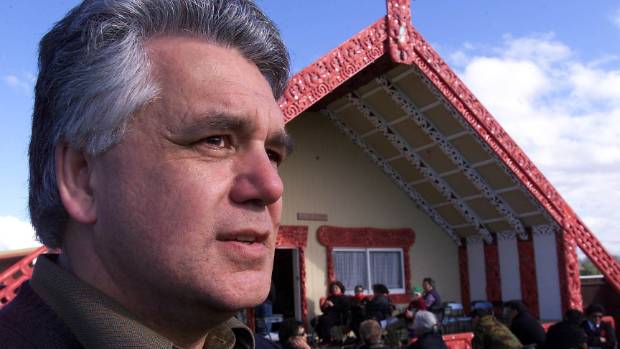 Moana Jackson: "If prisons are a moral failure, as the government says, how do you capture something that is immoral?"

OPINION: At the beginning of the Justice Summit this week, a minister of labor (I can not remember which, there were so many, but probably it was Andrew Little) the crowd asked for a handshake. Was there anyone among the nearly 700 delegates who did not feel that the New Zealand justice system needed radical changes?

No hand went up.

Despite what you may have heard, the top was not all yoga circles and kumbaya. Especially Māori delegates called out anger and frustration from the floor for more representation. They talked about the "brown elephant in the room", a reference to the out-of-kilter proportion of their people in our prisons. Someone has suggested that the system should be completely blown up & # 39 ;. 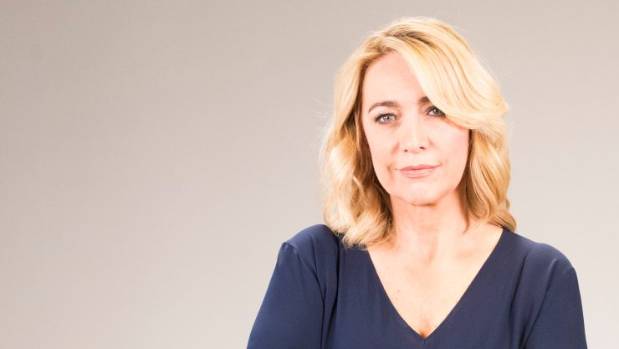 Alison Mau: "Take a deep breath and blow everything up."

I called Friday Moana Jackson to see if that was his opinion (it was hard to tell from the podium). He was cautious in that direction, but he said it was the third justice stop where he had been, and nothing had changed.

READ MORE:
* Damien Grant: we will need more prisons
* Love behind bars: called Prison admin officer
* Mother of the murdered 3yo slams justice stop
* Pleas for a better representation of Māori in reforms

Jackson has a good reason for deja vu. In 1988, his report, Whaaipanga Hou, revealed the systematic bias against Māori in the criminal justice system. He is about to spend and update, 30 years later. Thirty years, and no change.

"I could use the old recordings from the interviews of the eighties because the reactions (today) are all the same," Jackson told me. Apart from the astonishing increase in prison sentences for Māori women, who were in the 1980s one percent of the female prison population, and now 64 percent.

He has called for a more "imaginative" discussion about police and courts and about the prison, and at the top was imaginative what we got. On the last day, the delegates were divided into 40 groups and asked to come up with a vision for the system in 2040. The chosen date was intentional – the 200th anniversary of the signing of the Treaty of Waitangi.

Yes, the starting point for the exercise – design a front page of the newspaper for August 22, 2040 – was rather cute and must have called some eye roles. The results really surprised the room. Almost every group came back with the same headline: "New Zealand closes the last prison." 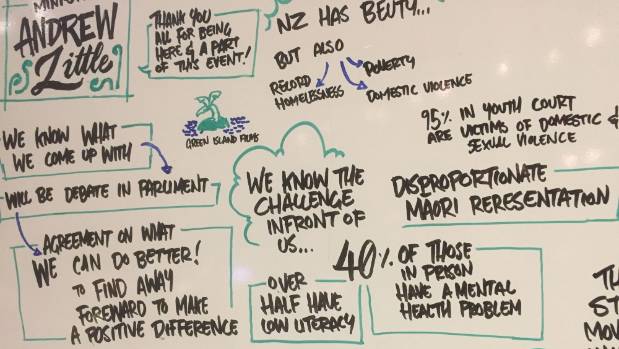 Live the sketching to bring clarity to subjects at the Criminal Justice Summit.

A collective vision, of hundreds of government, NGO and frontline players, for a country without prisons. Not at all.

At lunch I spoke with Drugs Head Ross Bell who, like most, was intrigued by the concept.

"This is a revolutionary change that we are talking about, are we even suitable as a government and a country to do this? Have we done a big system change well? If we do not, we're just working on the edges? "

All excellent questions. Roger Douglas and then Ruth Richardson succeeded in the 80s and 90s with a white-hot pace as they pursued economic reforms. Whether you think those reforms have saved us or let us down, they were largely based on imported ideology and that will not work this time.

We can look forward to the Scandinavian countries that close prisons because they do not have the perpetrators to fill them. The Dutch started the trend by prioritizing rehabilitation and rolling out a widespread electronic single monitoring system. Together with the relaxed drug laws, this has reduced their incarceration rates to only 67 people per 100,000 (New Zealand is more than three times that of 219 per 100,000).

All this could help, along with the best ideas for early intervention, rehabilitation and helping Māori communities to reconnect and flourish at the top.

But it does not address the fact that the prison itself is a completely strange concept for Māori. As Jackson notes (like all native cultures around the world), there was no imprisonment before Europeans arrived. In fact, there was no word for "prison" in reo. • If prisons are a moral failure, as the government says, how do you capture something that is immoral? & # 39; he asks.

I assume you can not. You take a deep breath and blow everything up.

Andrew Little and his fellow Ministers promised at the beginning of the Justice Summit that they would listen carefully, and as a consequence they had to be agile, and announced that they would finance a separate house for Māori and for victims of crime, be sure that all opinions are fully heard and to continue the conversation.

Moana Jackson told me Friday that the Māori house will probably leave the short-term stuff to others and will look at how the long-term goal can be achieved – the dismantling of the prison system.

Stop tinkering at the edges.