A low seat in the west of the country feeds multiple fronts over the North Island while the rain continues to fall.

The week began with heavy rain showers in the west of the upper South Island and west of the North Island, snow further south – and even tornadoes amid predictions of widespread thunderstorms.

By the end of the month the rain basin had been moved to the east and slightly eased – but it was only the beginning of what was expected to be a week. 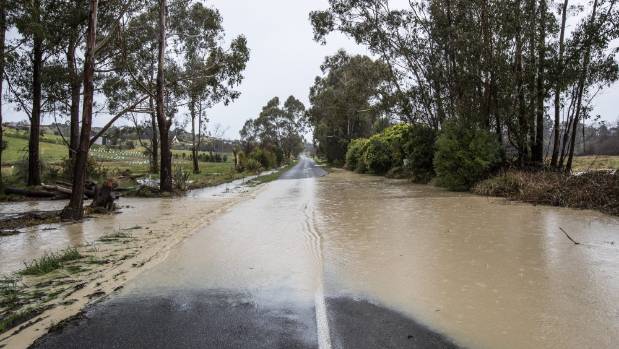 Permin Road, in Tasman is flooded Monday after heavy rainfall.

MetService meteorologist Tom Bell said just after 8 pm: "In general, the main low center is still to the west of the South Island and that is currently feeding a number of fronts above mainly the North Island.

READ MORE:
* Stark week ahead for the South Island when the winter returns
* Tornado & # 39; s damage homes in the center of New Plymouth and Ohope

"There is a kind of main front edge that has a good solid amount of rain and there are a few other troughs where rain and rain are connected to." 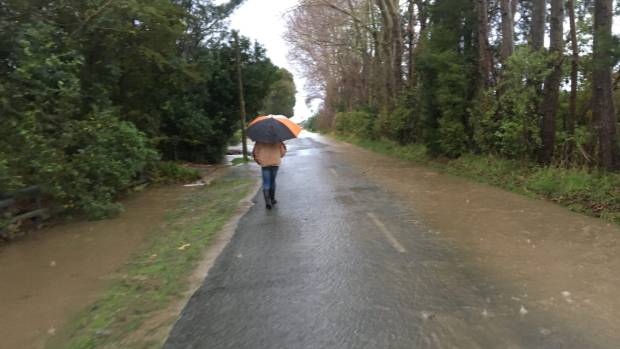 Kina Beach Rd in Tasman flows from a flood of rain on Monday morning.

At that time the areas with the most rain were from Wellington, to Whanganui and from the Central Plateau via the Waikato and up in the direction of Auckland.

"That can cause even more thunderstorms and lightning strikes, but that activity is currently generally declining."

Bell said it was "just a set-up at the moment".

"It just continues to feed showers through the country, especially the North Island and the west of the South Island, at least until tomorrow.

At 3.00 pm Dawson Falls had received 114.5 mm of rain in 12 hours on Mount Taranaki – the highest total rural range. Nearby, North Egmont received 91 mm at the same time.

MetService meteorologist Matthew Ford said that the rain and cold temperatures in the south would flow together for snowfall at higher altitudes.

And the early morning snow closed the Lewis Pass, which connects North Canterbury with the west coast.

The State Highway 7 section between Hanmer Springs and Springs Junction was closed just after 7:30 am, but reopened later in the morning. Heavy rain and thunderstorms are expected for a large part of the country on Monday.

WHAT IS ON THE ROAD

At night a heavy rain shower remains in place for Nelson west of Motueka and Buller until 6:00 am, with peak intensities of up to 25 mm per hour on top of the rain already fallen.

Extensive thunderstorm warnings remain in place for the western and upper South Island and most of the North Island south of Auckland.

The risk is serious in some places.

The risk of thunderstorms on the greater part of the North Island continues throughout Tuesday.

The wet weather and the isolated thunderstorms continue tomorrow for the west of the North Island and the Upper North Island, while there is still a low pressure over NZ. Do you want to know what it means to sit under a moderate risk in our storm chart? Find here the answers https://t.co/W1aSm813fu ^ AC pic.twitter.com/6KT6qe5YpA

Heavy rain guards have been issued for the beaches of Bay of Plenty east of Opotiki until 2 am on Tuesday and Tongariro National Park until Monday 11 am.

MetService's weather forecast states: "A large complex valley is slowly moving through New Zealand this week and is delivering restlessly to many parts of the country.

"It is predicted that an associated front will move eastwards over Central and North New Zealand in the course of Wednesday and Thursday, with rain and strong northwest winds coming to these areas … a cool southern stream is expected to the South Island spread during Wednesday and Thursday, periods of rain, and snow to the beaches of Southland, Otago, Canterbury and Marlborough, but the predicted rainfall and snow quantities are not expected to reach warning criteria at this stage.

"On Friday, the complex low-pressure system should leave for the east of New Zealand, which will spread the cool south-southwest flow all over the country through Saturday."

Winds (not storms) will also increase over much of the North Island, especially later Tuesday to early Wednesday.

Probably not harmful, but deserves to be in the trash cans early, so they are not on the street!