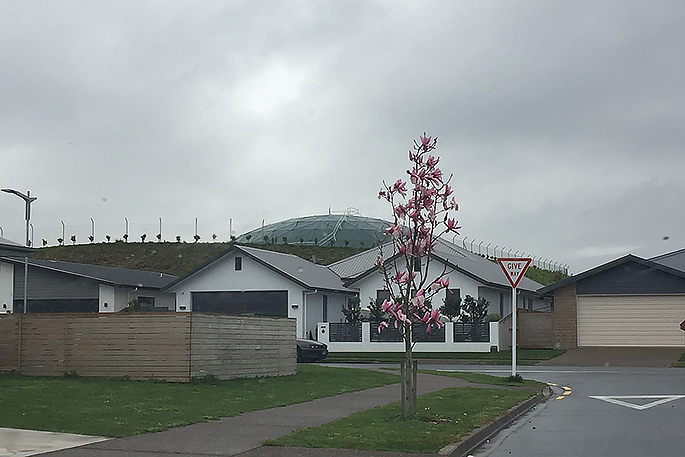 Is it obvious or is it a thorn in the eye? You get a glimpse of driving through the lakes or the Kaimai Range, a large green dome prominently on top of a hill.

It is a new water reservoir for Pyes Pa with a geodesic domed roof.

Michael Penet, resident of Penetaka, says the new development is a thorn in the eye. "Before 2010, the plan was to be completely submerged, but the plan changed some time later."

When SunLive visited the site, the reservoir is located on top of a hill and is surrounded by a security fence, planting and a retaining wall, and it looks like a modern view of the standard large concrete reservoir.

But according to Wayne, the structure has to rise another 1.5 meters in height above what we see in the SunLive image.

"The tank has changed in terms of design because it now has a roof with a geodesic dome, which makes it even higher", says Wayne. "Why did not they go with a flat roof?"

Wayne says that although he can not see the reservoir from his place, surely everyone around him will.

"It's in your face." And Wayne does not like it. He tried to talk with the locals, but many still go to the new subdivision and he did not have a chance to talk to them.

Wayne had a council member on the site to take a look. But he claims that he has been told that it is what it is and that not much can be done.

Peter Bahrs of the water services of the city of Tauranga says that all possible measures to soften the visual impact of the reservoir have been taken.

"The reservoir is partially submerged to hide it from view, and we have planted trees that will provide further screening when they are adults."

For more stories from the Bay of Plenty region – click here