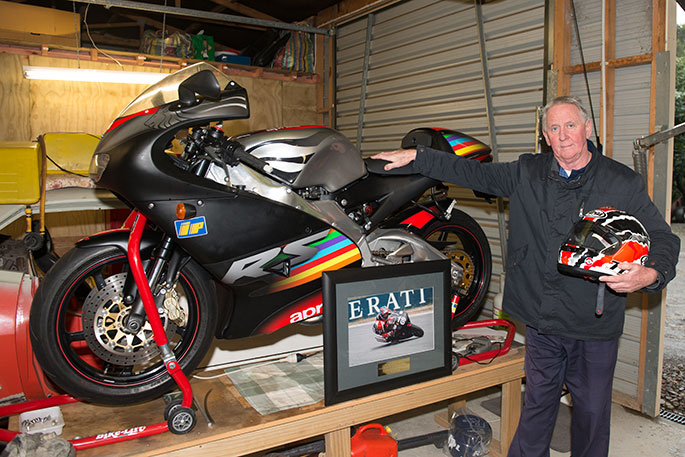 "Officially it translates as" whatever way you throw, it will stay there "," says Omokoroa motorcyclist, Malcolm Brown.

It is reflected in the distinctive Manx flag – a triskelion, three golden armored legs and golden spurs on a red background.

"So in whatever way I fall, I will land on my legs, which has not always happened to me, but I keep coming back", says Malcolm.

This is a story about high speed, crazy speed, a crash – a business – debt and a bid from a man on redemption.

Malcolm plans to participate in the Manx Grand Prix and the Classic TT event on the Isle of Man in September next year.

"It is for young riders starting out and older boys on older bikes who want to continue racing on the Isle of Man." At 68 Malcolm qualifies as an older guy. And there is also a RS250R V-twin Honda two-stroke with 90 hp-horsepower and a weight of 100 kg waiting for him in England.

But first there are unfinished things at home, things that need to be cleaned up. Because Malcolm is a debtor who is looking for a few creditors. It usually does not work that way, which tells us something about the man.

"I had a company – Brownie's Brewery and Motorcycle Museum in Katikati." The company went bankrupt, he was bankrupt and two creditors remained unpaid. Everything is arranged according to Malcolm, except that a kitchen worker owed $ 1500 and an electrician owed $ 4500.

"I've tried to find them, but I can not, I told them the moment I would pay them, I saved the money, it's on the couch and I want to pay them." He hopes this story wash away. "Then I can concentrate on the Isle of Man without conscience."

Isle of Man is the world's most dangerous motorsport circuit – 257 deaths in the last 111 years, including two this year. "No, it's not a fear for me," says Malcolm, turning away from his business demons to his passion.

"It is more dangerous for me to drive from Omokoroa to work in 9th Avenue, cars are the problem, not respect at all, but racing on the Isle of Man, you all go in the same direction and you know where you are and where you are going. "

Even at 273 km per hour up the mountain and through the village of Crosby. "If the white dotted line becomes a big white line, you are moving." A quick and smooth ride is the ticket, he believes. Fast and smooth.

Malcom raced at the Manx Grand Prix of 1980 and won the price of a newcomer, while he reached 154 km / h. "It was so foggy that I could not see the tachometer, I only looked at the white lines and wherever they went I pointed out on my bike.

"Would it be cheeky for me to ask for help to get there? I want my bike to be the city of Tauranga with an appropriate livery?" He plans to invite some local companies to a meeting to get the interest to test. But anyway, he goes; anyway, he will be on Isle of Man next year. The man who drove his way out of a financial mud at the wheel of shuttle buses is screeching.

"Two years after the bankruptcy of the case, I hid myself because I was ashamed." He only has to find that kitchen hand and the electrician, the redemption is complete and he can attack the bucket list.

Anyone interested in helping Malcolm with his business can send an e-mail to: [email protected] He would also be very happy to hear from the electrician and the kitchen hand so that he can finish some things.