Here there were minuses during the night, while elsewhere the temperature of the pool is still there 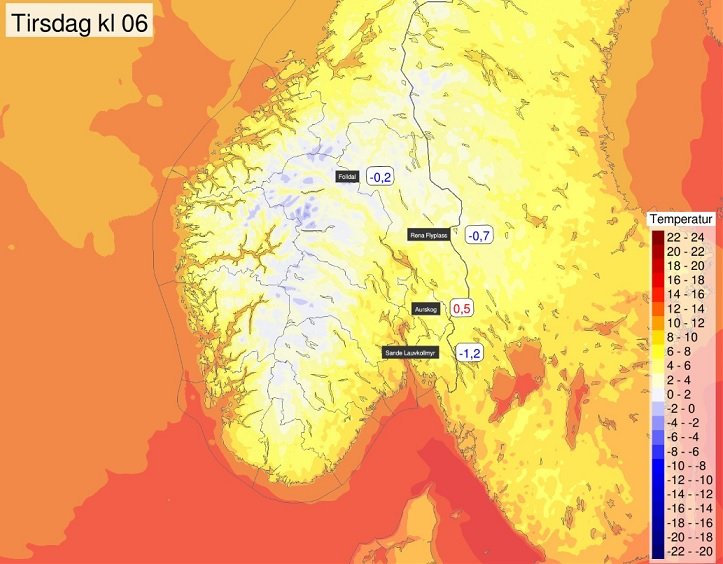 Night to Tuesday there were minus degrees in Telemark, for the first time after the summer. Kaldværet was in the mountainous areas of Vestlandet in Telemark.

At Frøystul it was measured at 1.5 degrees on the coldest and measured -1.7 degrees at Groset.

"With the temperatures there you might have to scratch the car," says Løvdahl.

Scales had 0 degrees and Mogue had 0.7 degrees. Haukeliseter had 3.7 degrees at the coldest. Løvdahl thinks that there may be more local frosts over the weekend and that it stays in the mountains.

In the vicinity of Grenland, the temperature has stayed around 10 degrees at night. Different places can still find bath temperatures. On Rognstranda a week ago 19 degrees was measured in the water.

– There are bath temperatures in different places, but these will vary slightly. You can expect from 15-20 degrees. The water stays on the temperature longer than the air, "explains Løvdahl, before continuing:

– It's a bit like it is now. There are minus degrees on the mountain and bath temperatures on the coast.

In Sande in Vestfold, 1.2 minus degrees were measured overnight.

"If we ignore mountain stations, it was the second coldest of the country tonight, and Sande is only hit by a place near Karasjok, says Løvdahl.

– It was called it. There are many people who have had to scratch windows on the car and some flowers have been hit, "says Løvdahl.

In Horten there are also 19 degrees in the water.