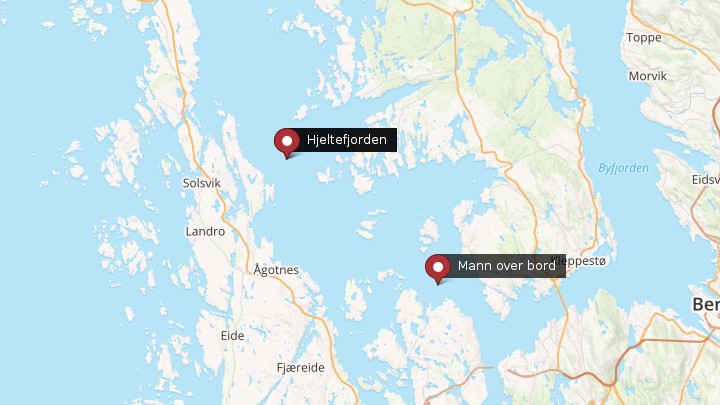 The head office reports the accident at 3.36 pm. One man falls from one sailing boat in Hjeltefjorden, near Anglevik on Sotra.

Several rescue operations were started, with police officers, firefighters and other lifeboats. In addition, two helicopters participate in the search.

There were two people on board when the accident occurred, according to the 110 center in Hordaland.

"There are more boats, but the person has not yet been found," warns Commander Karl-Arne Røyseth.

No discovery – start searching on land

According to operational leader Per Algrøy in the police district in West, the man has fallen overboard in the vicinity of Anglevik. It is unclear so far what happened before the man falls into the sea.

The police announces at 5.30 pm that they will soon be looking for land to find the man as a trap overboard.

– I'm about to assign a toy. It is normal to start near Anglevik. In addition, it is usually possible to search on the Askøy page, says operating engineer Algrøy.

Found a buoy on the land

The other person in the boat throws a lifebuoy if the man falls out. This became fairly early in the search for land.

– It has a ride on the land. It is difficult to see how the man can be in terms of flow and wind, so I lean over a wide area, Karl-Arne Røyseth wins around 17 hours at the 110-station.

Divers have not been in the water yet.