While the man was seriously injured in the wreck, people flocked to take pictures 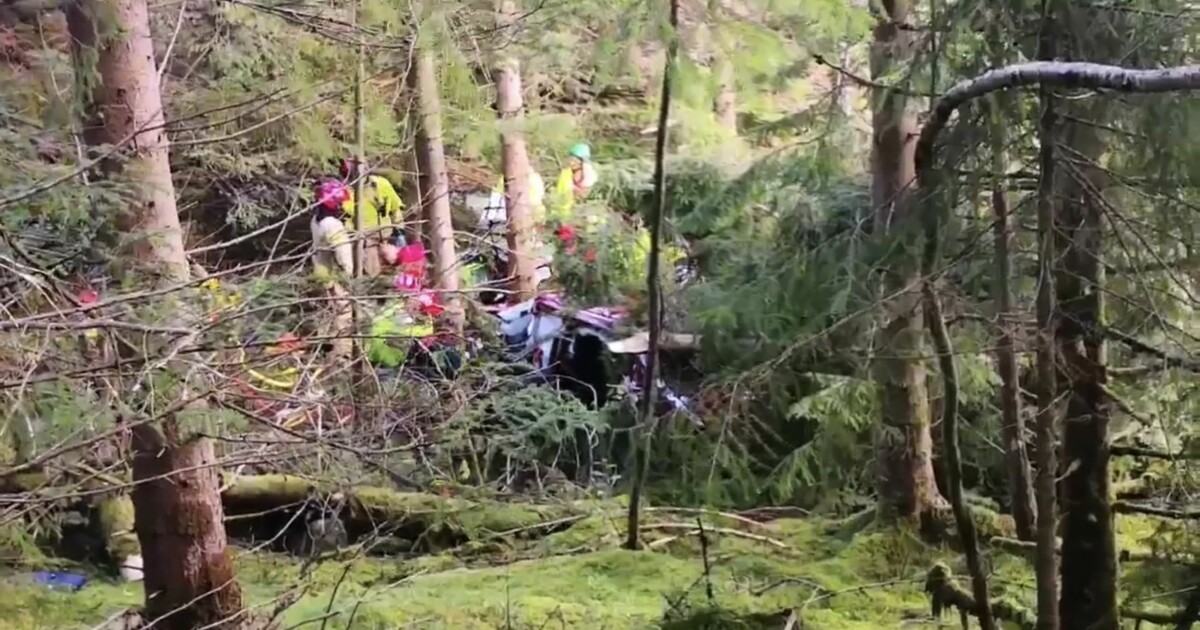 Just after 12 o'clock the police reported a serious traffic accident on provincial road 563 on Askøy outside Bergen. When the emergency services arrived, they found an 80-year-old man stuck in the wreck after the car he had driven had taken the road and crashed into a turtle.

"This is a serious accident, the injured person is an older man, he should have been aware of when he was trying to get him out of the car," said operational manager Morten Rebnord in the west police district in Bergensavisen earlier today.

The fire brigade had a hard time getting the man out of the wreck, which had ended an estimated 10-20 meters from the road. "We cut the car and then used chains and winches and dismantled the car, we used trees as motives and we had to be creative because the car was in a forest cavity," says Sveinung Sivertsen, the deputy leader of the fire brigade on the spot. , to Bergens Tidende, who for the first time mentioned this case.

The man was then flown with an ambulance helicopter to the university hospital in Haukeland in Bergen, where he is now being treated for what is called serious injury.

"It is certainly not something we want," he told the newspaper.

Sivertsen tells Dagbladet that there were many more than a few who had found their mobile cameras.

"There were many people, the first rescuers who came to the site of the injury immediately had to betray a person … very thoroughly, to say so, as more work was done, more people appeared. slope and forest, he says.

Some have gone to the car to take photos of the injured man.

– The threshold has been lower

Sivertsen emphasizes that most people retired after they received a clear message from the police and firefighters on the spot.

"But in the start-up phase this was disconcerting: we are annoying people who go straight to the scene, both on behalf of the wounded, but also because it could be a security challenge, he says.

Sivertsen says that he has experienced similar situations before and believes that a clear change has occurred in recent years.

– Everyone has a camera on the phone. It must be filmed or recorded to document what has been experienced. The threshold has clearly become lower, he says.

The firefighter, however, adds that he does not experience it as a major problem in daily life and emphasizes again that most people can listen carefully to the messages they receive from emergency services.

"But there are a number of reasons why you should not do this, you have to think about the privacy of the injured person, it might not be wise to go to a damage guard for safety reasons, and this can hamper the work we do "says Sivertsen, in which he explains:

"It is often chaotic in the early stages, when we have just arrived at an injury site and are working on mapping." When the audience gets lost and interferes, the situation can quickly become more chaotic, so it is important that people remain at a certain distance.

He also warns against the distribution of identifying images on social media, as this may allow relatives to receive an obituary message before being notified by the competent authorities.

"It is allowed to think twice," says Sivertsen.

It is not the first time that there have been reports of unreasonable behavior by the public at crash sites.

– The most worthless part of humanity

In 2016 Richard Håkansson told Dagbladet that he looked like other drivers who prefer to pick up the mobile phone than to help with traffic accidents.

– This is a growing problem. People prefer mobile rather than help. Moreover, they stand in the way of the assistance that tries to do their job ", says Håkansson.

He thinks they have to think about what it is like for the people involved to be photographed. Especially for those who are critically injured.

"You belong to the most worthless part of humanity, that you would like to take pictures of injured people, I think that's disgusting." To stand in the way of their accident with their children. rescue personnel that is there to save lives, "he wrote in a thundering Facebook post after he had retired when a colleague ended up in an accident.