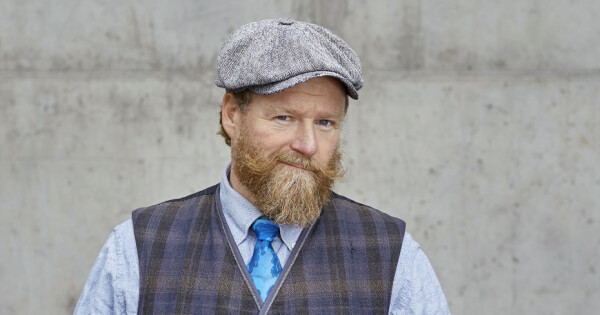 I just try to be myself, we often say. But who are we? When TV personality Petter Schjerven (52) took a personality test, he was surprised.

The personality test I took showed that I am very “normal”, says Petter Schjerven – and that sounds a bit disappointed.

Together with the psychologist Rolf Marvin Bøe Lindgren, he wrote the book “Who are you”, through which you and I can become wiser about ourselves.

Read more about which celebrities score high on the five major personality traits at the bottom of the case.

A similar test that Petter has taken is with the book

– Yes, I was surprised by the answer I got after the test, admits Petter, who is often referred to as the “screen troll”.

Petter says he should always stand out.

– As a youngster, I went in to find my own style, wore weird hats and coats, and liked that I wasn’t like “everyone else”.

– I’m actually the most “normal” celebrity that Rolf has tested, says Petter and laughs.

The established name from Nordstrand in Oslo is married to Norunn Blichfeldt Schjerven (52) and together they have children Lasse Wilhelm (19) and Jenny Mow (17). Many of us remember him particularly well from the TV shows “Typical You”.

– Comforting Rolf said to me: ‘We need people who score in the middle of the tree. They create security ».

In the book Petter and Rolf ask; “Who are you? And who do you work best with?”

– Are you open, planned, humane, neurotic or outgoing? Extrovert refers to the degree to which you enjoy being with others or participating in activities.

These personality traits are called “the big five”. We can all more or less identify with these traits, but it is often one of the factors that stands out.

Petter himself received the highest score for humanity and openness.

He loves the people around him, gets to know people easily.

The test attached to the book has been tried on several Norwegian celebrities.

– For example, did you know that Bjarte Tjøstheim and Thomas Seltzer are among Norway’s most neurotic celebrities, that Fredrik Skavlan scores low on humanity and that Linn Skåber never admits? chuckles Petter – with their permission to share.

Read more about which celebrities score high on the five major personality traits at the bottom of the case.

– More knowledge can make you and me a better friend, friend, boss and colleague. I learned even more about who I am and hope that those around me enjoyed it too, says Petter.

Petter, who has an intermediate degree in psychology, believes it is possible to change personality. But he stresses that it “doesn’t happen overnight”.

– It applies to the core of you. First ask yourself, “Do I want to change who I am?”

If you don’t harm others, he sees no reason for it.

Fortunately, most people are quite happy with who they are. Rather, become aware of how you react in different situations so that you can function optimally both at work and at home.

The legacy of home

Petter says that we “inherit” the personality of our parents.

– The resemblance has grown over the years. Perhaps, like me, you have noticed that you are becoming more and more like your mother or father?

If you’re wondering what are the best and worst combinations of “the big five” – ​​Petter can reveal:

– If you get a high score on both extroversion and humanity, you probably have a very good social flair. When you have low neuroticism and a lot of compassion, you feel comfortable, carefree and caring. If you score high on planning and humanity, I assume you are a caring and solid friend.

Bad combinations are high neuroticism and low schedule. Then you are probably looking for chaos and you cannot clean up. High extraversion and low compassion make you at best someone who is preoccupied with things and projects, and only involves like-minded people.

– That we are curious about who we are is useful to ourselves as well as to others.

But essentially we are much the same.

These are the 5 great personality traits

Extraversion:
People with high scores on extroversion are often outgoing and social, but not necessarily. It’s more about how much you enjoy being with others.

Compassion:
If you score low, it may mean that you are sometimes paying too little attention, but it should not be confused with low empathy. People who score high can sometimes be too considerate, ignore themselves.

Schedule:
You know exactly how to do with you and your daughter, and you don’t feel like others know. It may seem tedious, but planning is the personality factor that best predicts ability to perform.

Nevrotisism
If you score high, you are more likely to worry. The difference between how anxious and worried you are can be huge.

Transparency
You who score high on openness are curious about much, like other lifestyles, moral and religious values. The one who scores low has more confidence, thrives on routines, and that things are as they always have been.

Also read: Here are the real jobs of the “Shall we dance” dancers