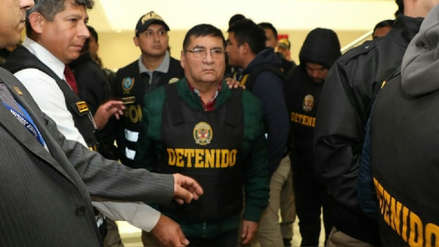 The judiciary has issued preventive detention on Saturday night for 26 months for the suspended mayor of La Víctoria, Elías Cuba, as well as his son Eliseo Cuba and businessman Alexander Peña, because they are the alleged leaders of the criminal organization "The edible untouchables", involved in the collection of quotas and extortion traders from the referred district.

Among the crimes attributed to the organization to the detainees, participation in a criminal organization affects hobbies. , bribery, unjust accusations, concussion and falsification of documents.

On 3 August the national police carried out a mega-operation to capture Elías Cuba, his son and 22 others, on the accusation of integration a criminal gang that collected a fortune by making unlawful accusations to traders and street vendors from different commercial areas of that district.

On the same day, the Minister of the Interior, Mauro Medina gave details of the mega-operation which led to the dismantling of the criminal gang Los Intocables Ediles & # 39 ;, led by the mayor of La Victoria Elías Cuba Bautista .

The organization – which had been active since 2016 – collected approximately 25 million soles per year in illegal collections, mainly to street vendors and parking. "The collection of shards was disguised with the discretion associated with waste collection", explained the minister.

Regarding the car park, Medina revealed that the members of the organization paid six suns to the drivers to whom they distributed tickets worth only 90 cents. Moreover, in the vicinity of the Fruit Market, truck drivers had to pay up to 40 soles per hour .

Hangs together with murders

The minister reported that the police investigate the nexus of & # 39; Los & # 39; Untouchables Ediles & # 39; with three murders in the district as well as an attack against a union leader of La Victoria.

Medina warned that it is still necessary to arrest at least 10 additional members of the organization including Alexander Peña Quispe alias & # 39; Engineer & # 39 ;, syndicated as financier. The police overtook the home of this person, who is abroad, and finds three firearms.

The list of suspects as well as their functions and positions, according to information from Interior .

– Alexander Peña Quispe is syndicated as financier of the criminal network.