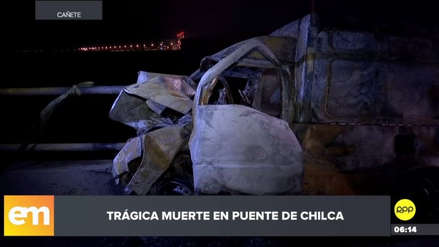 Two people died burned in a tragic traffic accident this morning at the height of kilometer 62.5 of the South Pan-American highway, in the district Chilca, in Cañete.

The van in which they were on their way crashed with the handrail of Puente Quebrada Chilca 2, also known as Puente Río Seco, in circumstances that may give rise to research. Product of the violent shock, there would have been a gas leak that caused the explosion.

The occupants of the vehicle died burned and their bodies were completely unrecognizable.

Criminalist experts found in the truck burned the DNI of Flower of María Choque (23) and it is assumed that it would be one of the victims. Meanwhile the truck is in the name of Ramón Valencia Mendozaalthough it is unknown whether it was the person who was at the wheel at the time of the accident.

The researchers also found the remains of an animal, presumably a pet, in the van.

The corpses were transferred to the mortuary for identification. To this extent the investigations keep knowing what has happened.

The neighbors insured RPP News that the area it has poor artificial lightingso it is dangerous for drivers. It would not be the first time that a traffic accident takes place at the site.