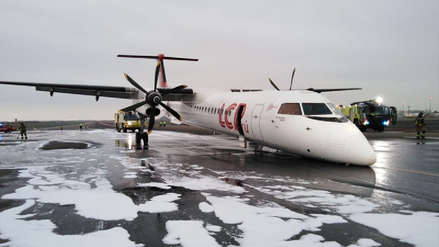 The airline LCPERU announced on Sunday night the reasons why one of his planes had to make an emergency landing at Jorge Chávez airport.

Through a statement they explained that the plane Bombardier Dash 8 Q-402 He had left for Ayacucho when he had an indication for an uninsured nose train, so he had to return to the air terminal.

They also explained that the crew had carried out the procedure set by the manufacturer to deal with such situations. Then the pilot made a flyby on the runway to verify the failure in the frontal landing gear and then a flight to relieve his weight.

State of passengers and the plane

As far as the situation within the aircraft is concerned, the company noticed that all passengers They are in good health and were evacuated after landing. Inside were 59 passengers and 5 crew members.

She added that this aircraft is state-of-the-art and has all safety certifications required by the Directorate-General for Civil Aviation (DGAC) and the Federal Aviation Administration (FAA).