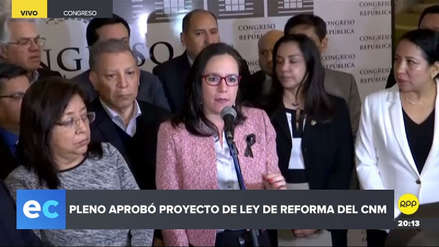 The banks of the Congress they spoke Tuesday after the plenary unanimously approved the constitutional reform of the National Council of Magistracy (CNM).

In statements to the press, the president of the Constitution Committee of the Congress, Rosa Bartra (Fuerza Popular), emphasized the position of her caucus when she voted for the reform of this constitutional body. In addition, he noted that there was consensus for the initiative of the executive.

"I appreciate the hard decision of my caucus, which found an echo in all groups and in consensus the proposal of the executiveit is a task that connects us all. Welcome the reform and keep working. "

Support for the president

The Alliance for Progress spokesperson, César Vásquez, assured that from the outset they agreed to the reform that President Vizcarra had proposed because he believed that corruption "can not gain ground in the country."

"It was necessary to show that the political class is determined to fight against corruption. There have been points that we would have liked to have approved as a fight for the balance between the sexes and this order was not taken into account, "he said.

They ask for a referendum

The Peruvian spokesperson for the Kambio, Gilbert Violeta, emphasized the banks' commitment to approve the constitutional reform, ignoring the differences. He added that it is now the turn of the population to reform in the referendum.

"After having obtained 112 votes to approve the opinion unanimously, it is a reason to be proud, to emphasize that this constitutional reform must continue, according to article 206 of the constitution, through a referendum that must be ratified by the Peruvian people, "he said.

The New Peru spokesperson, Marisa Glave, welcomed the consensus in the parliamentBut he said they would remain vigilant to decide on the referendum.

"We are going to be vigilant, so that a decision is made quickly, so that it formally goes to citizens' consultation," he said.