Candidates sign an engagement for the restoration of the historic center 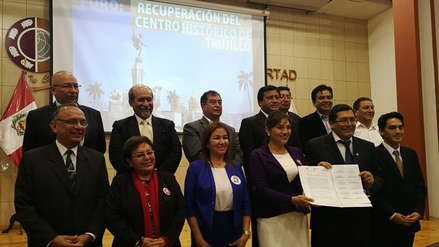 All were summoned, but there were only a few. Of the 18 candidates for the provincial mayor of Trujillo, 12 participated in the forum called "Restoration of the historic center of Trujillo" organized by the Chamber of Comercio de La Libertad

Participants in the event were the Decentralized Directorate of Culture of La Libertad UNESCO and the PAMT, who with their representatives explained the importance of continuing the work in Historical center of Trujillo in one of the patrimony of mankind.
Enrique López Hurtado coordinator of the cultural sector of the representation of UNESCO in Peru, described as & # 39; a good sign & # 39; the presence of the candidates for this forum.

Each candidate for the provincial mayor had five minutes to present his government plans all agree on the restoration of the principle of authority, because of the presence of ambulatory trading, the big houses risk and vehicular chaos.

At the end of the meeting, the candidates signed a commitment for the revitalization of the historic center.