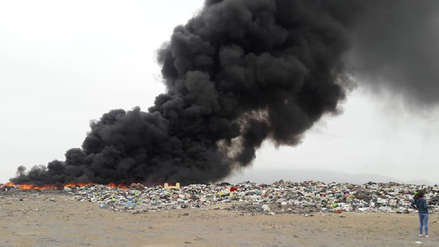 Irreparable damage. The inhabitants of the Reque district province of Chiclayo (Lambayeque region) no longer support the pollution generated by the landfill that lies a few meters from the city.

The immense amount of Waste that is burned daily (about 700 tons per day), not only detrimental to their health, by the huge columns of polluting smoke that penetrate population centers and nearby areas, but also represent irreparable damage to the environment.

The waste collected in the areas of Chiclayo, José Leonardo Ortiz and La Victoria is abandoned in this vast 400-hectare pampa where it is incinerated by the recyclers. Skin defects, respiratory damage and other infectious diseases are incurred by residents at the landfill simple families who are tired of life surrounded by waste.

The pobladores recanos expect that the concrete more than ten years ago the offer of the provincial municipality to install a sanitary landfill, however, various municipal administrations have taken place and nothing happened.

" We demand an urgent solution to this problem of waste It is not possible that the environment continues to deteriorate and also because it means a direct aggression against people's health," said the villager Miguel Iglesias .

The municipality of Reque warned that the mess has grown considerably in the last five years and that little by little the space is running out to house garbage.

"The municipalities of Chiclayo, José Leonardo Ortiz and Victoria have to do something that smokes thousands of people," said one resident.