The journalist Claudia Cisneros did not hesitate to respond to the Fujimorist Carlos Tubino for the deplorable tweets he published, in which he attacks the journalist and writer Pedro Salinas for the Sodalicio case.

"It is no longer surprising that a fujimoko is determined to deal with child molesters, which is how dirty and soulless they are," he said. Cisneros via your Twitter account. 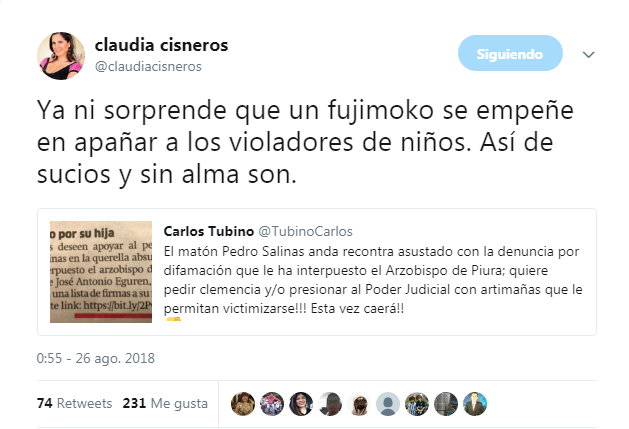 the fujimorista is questioned in twitter after referring to the conviction that bishop sodalite José Antonio Eguren Anselmi SCV, archbishop of Piura and Tumbes, has summoned Salinas.

"The bully of Pedro Salinas and a recontra afraid of the slander complaint filed by the archbishop of Piura; he wants to ask for leniency and / or press the judiciary with tricks with which he can become a victim, "he said. fujimorista.

Another user of this social network also responded Tubino for these affirmations. "Are you a supporter of pedophiles? Another row to the tiger," he criticized.

however, Tubino He again used his Twitter account to attack, this time against Claudia Cisneros. "As always turning and acting as a waste as a human being, her traumas from her childhood let her act like that," he said. This tweet also received criticism. 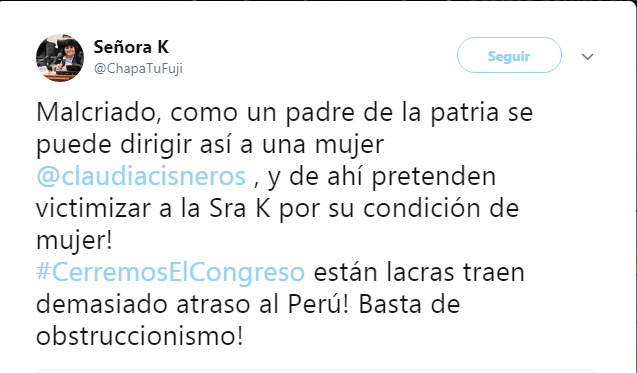 It should be noted that the complaint against Salinas is qualified, by lawyer Carlos Rivera, as a "repressive measure and an attempt to influence freedom of expression."

"The complaint presented by the Monsignor Eguren it is a repression through the investigations that Pedro Salinas and that they have caused a criminal complaint against the defendants violations and abuse of minors. It is unbelievable that he denounces himself for the revelation of the truth, "said IDL's director.

As you recall, thanks to the publication of the testimonials that Pedro Salinas wrote in his book "Half monks, half soldiers"It was possible to denounce members of the Sodality of Christian Life, including Luis Figari for sexual abuse of minors.