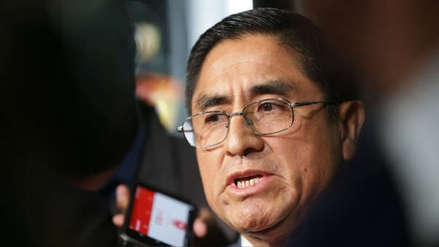 The congressman of New Peru, Oracio Pacori, presented on Tuesday to the Subcommittee on Constitutional allegations the final report of the seven constitutional complaints against the suspended judge César Hinostroza and four members of the National Council of Magistracy (CNM).

Through a message on Twitter, the parliamentarian noticed that he was responding to delivering the final report within the set deadline. He added that he expects the president of the Subcommittee on constitutional accusations, César Segura (Fuerza Popular) invests a session to discuss the problem.

With regard to the conclusions, the parliamentarian noted that some crimes were typified in a different way and that the constitutional violation committed by Hinostroza and the ex-advisers was seen, such as influence on peddling, passive bribery and active bribery.

the Prosecution, the bank of Peruvians through the Kambio and the Congressmen, Gloria Montenegro, Marco Arana and Richard Arce filed against constitutional complaints César Hinostroza and the ex-advisers Guido Aguila, Iván Noguera, Orlando Velásquez and Julio Gutiérrez Pebe.

The Constitutional allegations subcommittee appointed Pacori to establish the report of facts and evidence in the file that collects the complaints against the judges.