GFK: Vizcarra makes 16 points and the approval of the Congress falls back 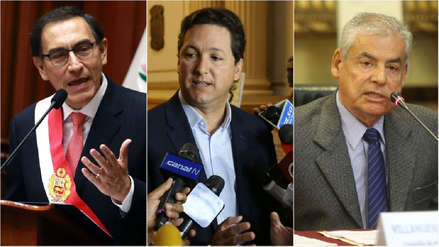 The approval of the president Martín Vizcarra it rose from 27% to 43% after it had held a referendum on the reform of the National Council of Magistracy (CNM), the bicamerality, the non-re-election of congressmen and the illegal financing of parties, according to the last national urban house GFK.

This is how Vizcarra reverses the downward trend that has been taking place since April. The head of state's approval is greater in the east of the country (64%) and in Lima (49%). Meanwhile, their disapproval drops from 58% to 46%, and is higher in the center (63%) and south of the country (57%).

It also increased the number of those who believe their management is better than that of Pedro Pablo Kuczynski (from 27 to 37%) and who consider that with Vizcarra Peru will once again grow economically (from 37 to 42%). More than half of the Peruvians (54%), however, believe that the President has no clear work plan for the development of the country.

Meanwhile, the head of the Council of Ministers, César Villanueva, maintains the approval level with just over one tenth of the population (13%). The area that supports this most is the east of Peru (22%). Those who disapprove are the majority (69%) and the center with the highest rejection (78%).

the Council of Ministers it is worse, with only 10% of the population adopting them, while their disapproval reaches 82%.

The approval of Congress continues in one digit (7%) and decreases a point from the last measurement. Including, 44% of the population think that the legislature will perform worse than it has up to now. Meanwhile, support for the President of Parliament, Daniel Salaverry, it's at 24%.

Almost half of the Peruvians (47%) think it is new Board of Directors it will work like the previous one; while 46% believe that with the election of the board the relationship of the executive power with the Congress will not change anywhere. Moreover, 44% believe that the relationship between these two powers of the state is still a conflict.

In the framework of the reforms proposed by the executive branch, 72% of the population were in favor of replacing the conference every two and a half years.